Comments from People Who remember them 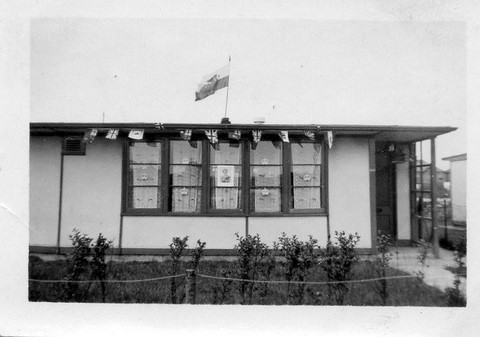 Linda Christine Robertson
Yes I remember the Southbourne Prefabs but there were also Prefabs off Field End Road in Seymour Gardens.We lived in one of the latter from 50 -54.The Prefabs were demolished in the 60s but not sure exact year.My mum said our Prefab was very cosy and we had an enormous garden where my Dad grew lots of crops.I remember living there although I was 5 when we moved.The kitchen came with fitted units and a fridge which was a luxury! There was a "copper" to do the washing in as no washing machines back then.Our Prefab was Canadian made but I believe the Southbourne ones were made in UK.

John Turner
We moved into one in Southbourne Gardens just after the war. They were great even having a built in fridge. Many years later while working as an electrician for Ruislip Northwood Council I used to carry out repairs on them. I think they were demolished in the early 60’s.

Fay Pearce
My mum had one in Seymour Gardens and moved to the flats that replaced the ones in Southbourne Gardens when the Seymour Garden ones were demolished.

Jacqueline Elliott
My sister lived in one in Southbourne Garden they were council properties before getting a flat in Long drive they were very basic.

Carole Holmes
Two aunts and my Nan lived in these prefabs loved to visit them, always warm and being in one level was great.

Pam Griffiths
My friend lived in one in South Ruislip. I loved it. So cosy and they always had a big fire.

Tony Hinton
I was born in 1948 and lived in the Southbourne Gardens prefabs until they were replaced by the flats. Which was when I was about 11 or 12.They were all made if asbestos so its amazing we are still here. Visiting the one at the Chiltern Open Air Museum brings back some very happy memories.

Ken Farley
They were knocked down in 1963, starting at the British Legion end.

Annie North
My Aunt and Uncle lived in 2 of the prefabs they loved them and rather than go into the flats they asked to stay in theirs but were told very firmly they had to move into the flats.

Bill Doran
I was brought up at no 196. Bloody freezing in the winter! Ice on the inside of the metal framed Crittal windows every morning. The dog’s water would freeze in the kitchen! Great fun for kids though, climbing onto the roof and shouting across to our friends.

They knocked the Eastcote end Prefabs down, moved tenants to other council houses in the area. Built phase 1 of the maisonettes then moved us into those and knocked ours down fir phase 2 etc. We moved home through the alleys between maisonettes using our old Silver Cross Pram. Mind you we had very little all in those days anyway.

Terry Pierce
I remember those prefabs being built but they had to build the road first it was just a dirt track and where the prefabs where built that land had a few apple trees on it . It was just scrub land and where they built the school that was allotments

John Sewell
....I recall the pre-fab estate [in Southbourne Gardens] as quite large and I thought they were very compact, modern and neat. As I remember they were all gone by 1960.

Mick Spence
Lived in southbourne gardens from 1952 -60. Great to live in, cool in summer warm in winter and many memories, great times.

On a less than cheerful note - from Paul W
Asbestos panelled pre-fab housing were death traps for some of the people who assembled and especially demolished them. Not all pre-fab housing contained asbestos. Types of pre-fab housing containing asbestos were, Arcon (developed and constructed by Taylor Woodrow), Cornish Unit, Howard, Phoenix, Reema and Uni-Sec. Exposure to asbestos dust can cause Asbestosis and in the worst cases may lead to malignant Mesothelioma, a particularly nasty and deadly form of lung cancer that may not appear until 20 to 50 years (or more) after exposure to asbestos. The sense of nostalgia for these homes needs to be balanced with the fact that some of them were constructed out of dangerous materials that were responsible for the deaths of workers exposed to it and which have now been banned in the UK. Blue and brown asbestos materials were banned outright in 1985 while the import, sale, and second-hand reuse of white asbestos was outlawed in 1999.

There are two more pages to read in this section, so as well as the opening page you can read the memories from people who used to live in them and also some more general information about post war pre-fab houses, where it has been written as relevant to the local area as possible.