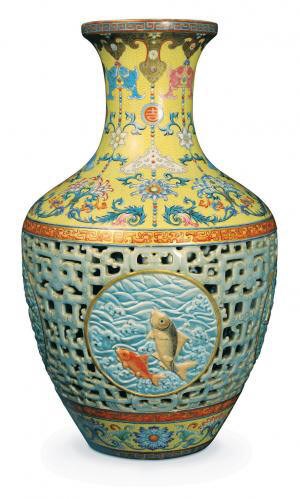 So it was that on 11th November 2010 Ruislip hit the headlines once again, perhaps for all the right reasons, as a vase found in a Pinner house was sold at Bainbridge's auction house in West Ruislip for £43,000,000. (or not as the case may be!)

A brother and sister have been left stunned after a Chinese vase they unearthed in a clear-out of a suburban house in Pinner was sold for a world record-breaking £43 million.

The 18th-century piece of Qianlong-era porcelain was expected to fetch between £800,000 and £1.2 million when it went under the hammer in Ruislip yesterday. But the total price, including commission and VAT on the commission, was £53,105,000 after bids in the packed auction room went sky high.

Believed to have been acquired by an English family during the 1930s or earlier, auctioneer Bainbridges said how it reached north-west London would never be known.  The owners, who had inherited it, had little idea of the fortune it would make them when they found it in the Pinner property.

The vase is understood to have been carried off by a private buyer from China for what is believed to be the highest sum for any Chinese artwork sold at auction. The eye-watering price it fetched shocked the both auctioneer and the owners.

Helen Porter of Bainbridges said: "They had no idea what they had. They were hopeful but they didn't dare believe until the hammer went down. "When it did, the sister had to go out of the room and have a breath of fresh air."

The auction in Ruislip, north west London, attracted many Chinese bidders keen to get their hands on a piece of their imperial past.  Bainbridges described the 16in-high piece as one of the most important Chinese vases to go on sale this century.

A posting on the auctioneer's blog said: "It is a masterpiece. If only it could talk!" The vase, decorated with a fish motif, was described as "a piece of exquisite beauty and a supreme example of the skill of the ceramicist and decorator".  The item has a yellow painted trumpet neck and a double-walled construction, meaning an inner vase can be seen through the perforations of the main body.

Qianlong was the fourth emperor in the Qing dynasty and one of the longest-serving in Chinese history, reigning from 1735 to 1796.  The Chinese ceramics industry in the 18th century was known for the perfection of its porcelain and the evolution of new decorative techniques. 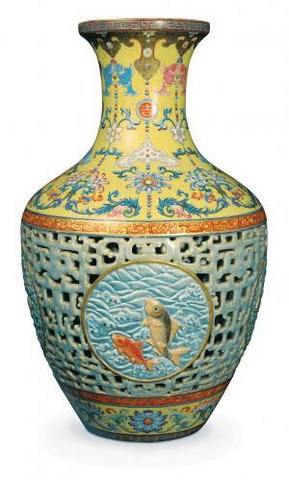 The auction house charges its fees on top - so the actual price was nearer £53 million, Bainbridges stands to make £8.6 million.

The auction lasted about 30 minutes and when auctioneer Peter Bainbridge banged down his gavel he did it so hard it broke.

The vendors have not been named, but the taxman will need to know who they are, as they will have to pay capital gains tax on the profit from the sale.

Related News: Auctions .Seller of $69 Million Qing Vase May Not Have Been Paid, FT Says

The owner of a Qing dynasty vase sold for 43 million pounds ($69 million) in a record-breaking auction last year may not yet have received payment, the Financial Times reported.

Peter Bainbridge of auction house Bainbridge’s of Ruislip said he was unable to confirm his client had been paid and that he had been instructed not to talk about the sale, according to the newspaper.

The vase, found in a bungalow in Pinner, northwest London, was sold to a Chinese buyer on Nov. 11, beating the prior record for the auction of Chinese porcelain of 18.2 million pounds, the Financial Times said.

The buyer refused to pay the auctioneers fees and in January 2013 it was reported that the vase finally sold for around £20/£25 million and not the £59 million it would have been had the fees been paid.