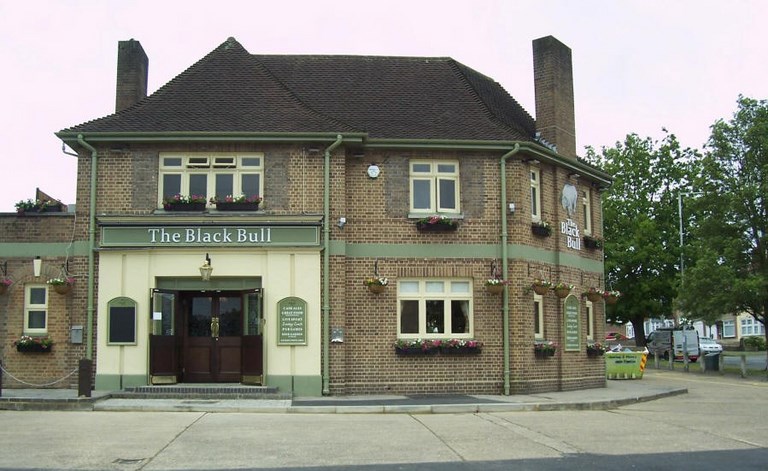 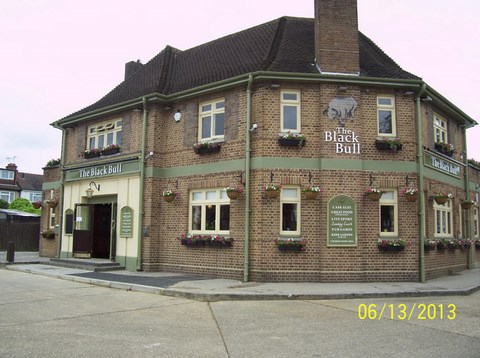 A pub in crisis before it was even built, and adjacent to a road with a similar problem!

The Black Bull stands on the corner of Torcross Road and Victoria Road, just in to South Ruislip (where the Yeading Brook, 200 yards north of it, is the dividing line between Ruislip Manor and South Ruislip).

When the Ruislip Manor estate was built at the site of this pub stood a massive machine producing bricks or the mortar needed to build the houses locally. When the pub was built it was to be called the Brickmakers (Arms?) but for some reason ended up being the Black Bull, and it has been called this ever since.

Torcross Road, on the corner of which it stands, also had a name problem and was initially called Torbay Road, but this caused confusion with a road only half a mile away with the same name in Rayners Lane and so its name was changed.

Over the years the Black Bull has passed through many changes of ownership and each seems to have their own idea of what will make it make money, (at one time it had a reputation for food) and it has suffered from at least one suspicious fire.

The pub underwent a re-fit in mid 2002 and now has a large sun-deck to the side and reasonable sized garden to the rear. Most major sports events are shown on the big screen TV. (Footnote - due to a problem with planning the sun-deck was removed)

Where it is, by road

From Ruislip drive to Ruislip Manor and head down Victoria Road under the railway bridge. Leave Ruislip Manor going straight on at two roundabouts and the pub will be found on the left just as the road starts to climb a small hill. There is a reasonable sized car park in front of it, or street parking.
There is a page on the more up to date Ruislip Online web site with more information here 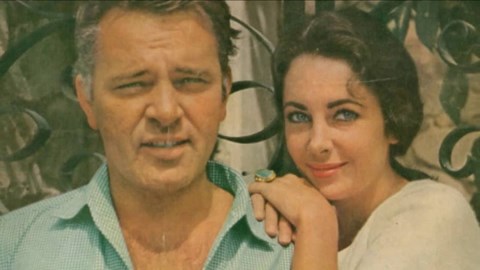 (Visitor's view) My last sight of it (The Black Bull) was viewed through an alcoholic fog due to my rotten mates spiking my beer with everything from the top shelf. Elizabeth Taylor and Richard Burton spent an evening drinking in the lounge bar  with a mob of hangers on, in the early 60's.
When it came time to leave, she led the way out through the saloon bar.
The door to the gents loo was next to the exit in those days, and Liz opened the door and marched in.
She earned a standing ovation and came out laughing. 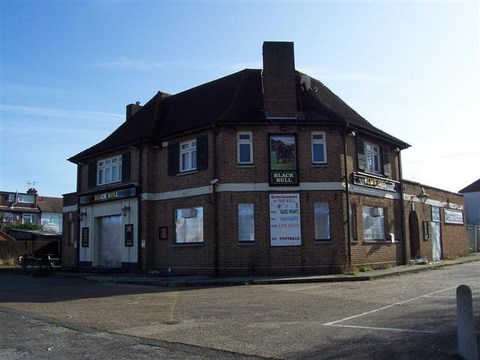 We all thought the wrecking ball was coming when it looked like this.
Interestingly it was always planned that houses would go on this site after the machinery used to build the rest of the Ruislip Manor estate was removed. For this reason if you look at the house numbers in Victoria Road either side of this pub they "jump" and an allowance in them was made to accommodate the four houses planned for this site.
Typical 30's suburban pub. The (then) landlord in 2003 won £18,000 for a £45 bet on the horses......

If you drive there "the Black Bull curse" will strike your car and it will have to remain in the car park forever, and may even turn in to a large van! (In order to try to stop the "van" part of this curse a height restriction has been placed over the entrance to the car park from Torcross Road, but not over the entrance from Victoria Road. Now I know "white van man" is reckoned not to be the brightest button on the tunic but....")