My father, Syd, worked for his entire career with the Geological Survey in London. Much of his time was spent studying, classifying and collecting fossils in various parts of England. He was very conscious of the practical aspects of his science and took credit for finding an important coal seam near Wigan, purely on fossil evidence.  He claimed it gave 200 miners work for 20 years.  At home in Ruislip he took an interest in local geology as well as local affairs in general. We moved to that fair village in 1932 so we were on the spot just as the building boom was getting under way.  On weekends he would take me with him to look at excavations. The deep cuts where sewers were soon to be installed were his favourite.  On other days, we would go looking for fossilised shark teeth in long abandoned sand pits.  Dad would record his observations methodically.

One observation dad made was that although chalk did not appear at surface anywhere in our district, it lay at no great depth. For instance, we discovered that the footings of the new railway bridge at Ruislip Manor station were in chalk.  Our ancestors knew that chalk was not very deep below them and dug numerous pits in the Northwood area to reach the chalk and mine out the flints.  Brick making used fuel that was hard to come by in the days before canals and railways brought coal to the district.  Houses were built of flint and the corners trimmed with the expensive bricks – look no farther than St. Martin’s church and ask where did the flints come from?  The shaft of more than one flint mine has opened up at Northwood to the consternation of local residents.

By the time the war started in 1939 and building stopped, there was little open ground left to build on anyway.  Our weekend tramping did not stop.  We had bomb craters to examine.  Each one that we heard of we visited to examine the debris.  I would collect bits of shrapnel and parachute silk on the side.

Wherever we found the chalk, dad would work out the elevation using Ordnance Survey bench marks and maps. Eventually, after about 20 years, he had enough elevation points on the chalk surface to allow him to draw contours. The resulting map is of interest in the light of the flooding problems at Bessingby Park(2005).  The contours on top of the chalk show the surface is dipping very gently southwards but there is a sharp wrinkle in it that runs roughly north to south through Bessingby Park and continuing northwards passing close to Eastcote station and on to Pinner.  This wrinkle is probably a line of dislocation, or fault (evidence perhaps of the great Eastcote Earthquake of three million B.C.!)  If this wrinkle really is a fault, then it is almost certainly an aquifer.  Could this be the reason for all the water that collects at Bessingby?  That spot must have had a history of sogginess for the developers not to have built there.

There were one or two areas of Ruislip that dad kept under permanent ‘watch’. “They should never have been allowed to build there you know”, he would say in his quiet way.


The Crown Building on Windmill Hill. 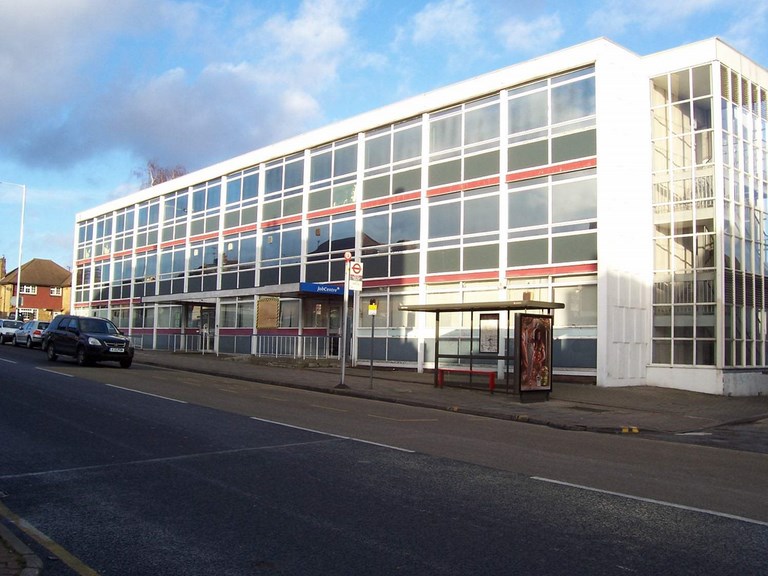 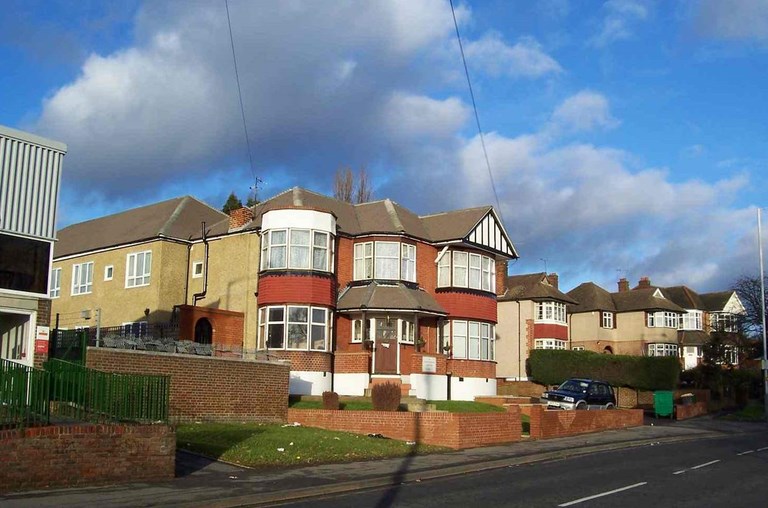 The house in Park Way (assumed, and  this house has changed substantially in recent years)

One of his favourite spots was around the intersection of Windmill Hill and Park Way. This is where the base of the clay forming Windmill Hill overlies a thin bed of sand which in turn sits on the chalk that is under the station.  Dad’s concerns were a standing joke between him and his doctor who practiced out of a house on Park Way.  “Have your walls cracked yet Mac?” my father would joke. When the walls did crack, the doctor asked in amazement “how did you know?”  Dad explained that the position of the house  on the contact between the clay and the sand invited problems. The house was saved by some expensive underpinning just before the floor of the National Insurance office at the bottom of Windmill Hill dropped one night. Since then, things have gone quiet.

Dad’s consuming passion was chalk.  Whenever a new hole exposed some of this rock, we would be there to pick over the material.  The millions of years that it took for the chalk we see today to accumulate on the floor of an ancient sea were long enough for the bugs that lived in it to evolve.  One such creature was a sea urchin about the size and shape of half a tangerine.  My father held my attention by explaining that the early version of this sea urchin had both its mouth and anus on the seafloor but as the beast evolved over millions of years, the anus migrated slowly to the top of the beast.  The story had scatological appeal to a small boy.  So it was I came to recognise micraster corunguinum (I’m still not sure of the spelling!) that, it seems, lived in a very thin zone within the chalk.

Again, dad constructed contours of the elevations at which we found our micrasters. The chalk looked the same throughout the succession but by using these little beasts as a guide, dad was able to show the chalk was folded into subtle little domes and basins.
Always looking for a practical application for his observations, he reasoned that any joints, or cracks, would tend to open up in the domes, and tightened in the basins.  The place to look for water would of course be the domes.
Armed with this conclusion, he was surprised when the water company sank a well at Ruislip Common.  The geologist that the water company consulted had expressed confidence that the well would yield water in abundance.  Not so, dad admonished, but by then the hole was being excavated.

When it was finally realised that the well was a failure, the water company took great interest in my father’s work and sought his advice. As a civil servant, he was not allowed to accept a fee so to compensate him, the manager and engineer would meet my father from the train at noon on a Saturday when he returned from work, and take him for a lavish lunch.  Wherever they went it must have been quite a spread as dad would conclude his entertainment by lying down for a several hours on his return!

The ultimate reward that the water company could think of was to invite dad to visit the underground workings of a successful well that resulted from his advice.  He tried to hide his feeling of satisfaction but he disliked making the visits.  He liked his creature comforts too much to delight in a trip down a wet and dirty well.  On one such occasion, he took me with him. We donned waterproof waders, coat and Sowester hat.  The well was not fitted with a ladder.  We descended in a bucket and then waded in water well above our knees along a tunnel that cut several vertical fissures from which water streamed out as a solid wall.  We lowered our heads and plunged through.  There must have been a pump of large capacity in the shaft below the level of the tunnel.  The fissures were all at right angles to the tunnel, which of course the best angle and a tribute to dad’s interpretation.  One fissure that I recall was about half a metre wide.  We were told that the wells were excavated without blasting. The miners, for that is what they were, worked in pairs using pneumatic picks to break up the chalk before shovelling it out.  When the miners cut a fissure, the initial stream of water was very strong.  At the first indication of water, the miners would drop everything and run ahead of the wave for the shaft where they hoped the bucket was waiting.  I suspect that modern safety procedures would require a different method of practice!

One piece of subterranean business of concern to Ruislip that dad left unfinished concerns the Great Harefield Worm Enigma.  The appearance of the upper surface of the chalk, where it has been exposed in holes in the ground around Ruislip, leaves little doubt that it was once exposed to the elements.  The top few feet of the rock are often broken up and covered with bits of shattered flint that give the overall appearance of an ancient subsoil. There are places, such as the former Portland Cement quarry at Harefield (now filled in a covered with houses) where the supposed subsoil is missing. Here, and at other sites around Ruislip also, the surface of the chalk is perforated by round holes about half an inch across and six inches or so deep.  Most are nearly vertical and all are lined with rust.  An early observer of this phenomenon concluded the holes must have been dug by some sort of creature and chose as a ‘best guess’ that it was a worm. Worms don’t make fossils very often, so the absence of any trace of this particular beast worm was not a source of concern.  The worm that lives in the Mediterranean and loves to bore holes into wooden ships is known as terebratula.  Here at Harefield and Ruislip we have another boring worm, so let’s call it terebratula too but to be specific, add herefieldensis. And so we have terebratula harefieldensis (th), an animal unknown in appearance alive or dead. All it left were its rust-lined borings.  This is the accepted story and is certainly one of great scientific import.  Dad and I would speculate about ‘th’. Why did it bore into chalk?  It must have had great teeth to chew down six inches of solid rock – but worms don’t have teeth…… The puzzle goes on.  The worm story really does not answer the obvious questions, but if not a worm, what are these funny looking holes.

What maybe the explanation of terebratula harefieldensis came about 25 years ago when evidence was found in the Gulf of Mexico of a meteorite that hit our planet at a far off date and was likely to have been the cause of the extinction of the dinosaurs and other beast. A thin layer of dark blue clay occurs in many parts of the world on top of the chalk, or rocks of the same age, and is thought to contain meteorite dust. This clay occurs at Ruislip at the bottom of the sand that covers the chalk.  Could there have been a shower of meteorite particles that seared their way into the chalk leaving holes in the chalk?  If so, terbratula harefieldensis will disappear from the record much as it appears to have done in fact and become an extinct enigma.