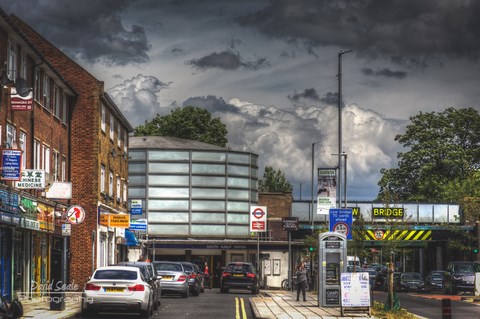 Ruislip Online would wish to point out that all the text below is copyright to London's Transport Museum and would wish to express unreserved thanks for their help in compiling this page. Why don't you visit their excellent web site?
The station originally opened serving the Great Western Railway (GWR) and Great Central Railway (GCR) joint lines on 1 May 1908. The construction of a completely new station was begun as part of the GWR's contribution to the Underground's New Works Programme of 1935 -1940. This projected Central line services on new electrified tracks parallel to the existing GWR lines. Delayed by World War Two (WW2), the new station opened on 21 November 1948 with the adjacent platforms still serving main line services. 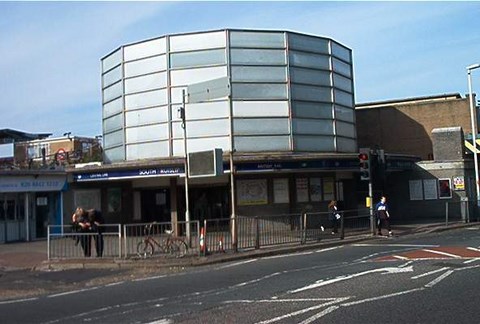 Like other stations on the western extension of the Central line, the station building was not complete when the station opened in 1948 and  temporary facilities continued to be used for many years to come, presumably in fact until the station building was completed in 1961-62. During the 1980s the booking hall was modernised as part of the Underground Ticketing System (UTS) programme, and the platforms were resurfaced. Some reconstruction was carried out in 1998 to the platforms and platform buildings, when new lighting and signs were also installed. 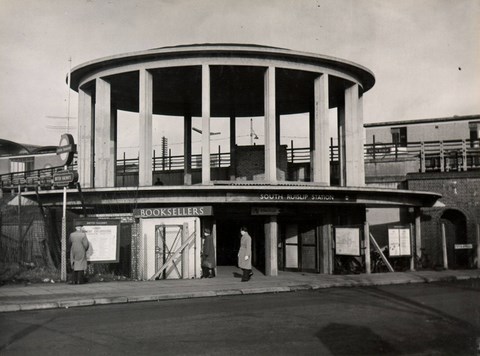 (It should be noted that RAF Northolt is nearby and when the base was built as this station was called Northolt Junction the name RAF Northolt was chosen as bases are, historically, always named after their nearest station.)

1948 Henry Haig Produced frieze on the interior ring beam of the station. 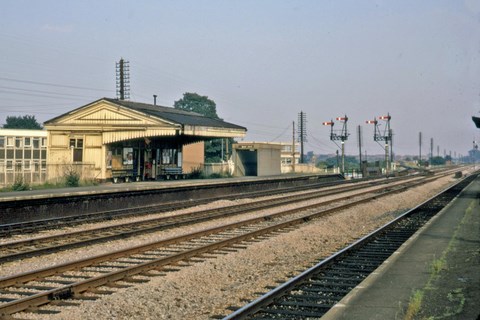 The station building was built adjacent to the original GWR tracks on Station Approach. Although not completed until the early 1960s the station building was constructed largely to Curtis's original 1946 design. The circular tower above the booking hall was in the original plan, although Curtis had designed this to be fitted with panes of glass between the slender concrete mullions. In the actual construction of the early 1960s the tower was constructed from translucent laminated glass/fibre glass curtain walling fixed to the outside of the mullions, forming a curtain wall rather than clerestory windows. Below the tower the entrance canopy is curved. There are two entrances either side of a central poster display, on each side of which are small single shop units. 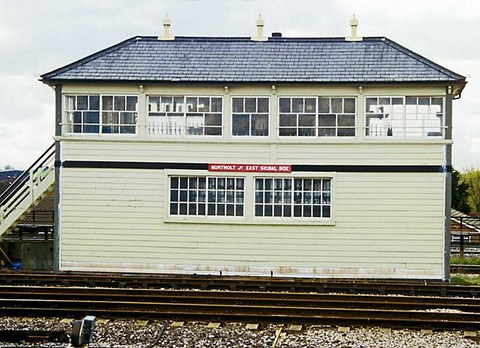 The signal box, which was just London side of the bridge, has now been demolished

Inside, the booking hall is dominated by a concrete frieze which is inset with panels of multi-coloured ceramic and granite chips by Henry Haig. The frieze is designed to depict the flow of passengers. In addition to being a striking feature in the circular booking hall it also provides cover for lighting and cabling. The domed ceiling remains in its original condition and the booking hall is partly lit by natural light through the clerestory windows above the frieze. The original wooden framed telephone booths have all been filled with solid doors, except one. The clock above the entrance to the subway to the platforms is an early example. The recent ticket collection booths and barriers have been brought further into the booking hall than the originals, which were set further back into the subway.

This subway passage forks left to a flight of stairs up to the island platform, whilst to the right a subway passage leads to the main line station. The subway remains largely intact, although some of the tiling is more recent at the foot of the stairs, as is the flush strip lighting and the aluminium  poster frames. The Underground platform access stairs retain their original timber handrails and the central balustrade is an early example. 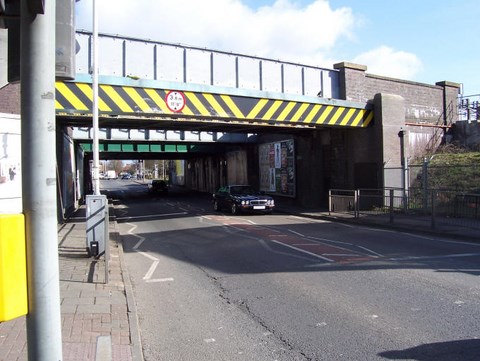 The platform is an island type and remains largely intact. It is covered by a concrete 'winged' canopy, which is supported centrally on tapered columns. The flush strip lighting now visible replaced the original strip-light fittings. On the platform is a single-storey brick unit, at the eastern end of which is a glazed waiting room. The pole-mounted station name roundels are not original. Those visible now are mounted on steel poles. Originally these were station name roundels mounted in vertical concrete slabs with an integral Y-shaped light above. The original tiled poster surrounds have been obscured by more recent aluminium frames. One concrete and timber platform bench remains intact, whilst the rest have been replaced with standard steel and timber versions. The platform clock, near the waiting room, is original, as are the bronze-framed route diagram signs which feature the two feathered arrows through a circle design.

The platform indicators are also worthy of note as the fixing brackets are original and the signs themselves, though not original to the station, are replacements of a very early type. The bridge is below "normal" height and was, according to Network Rail, in 2019 the 15th "Most Bashed Bridge in Britian" 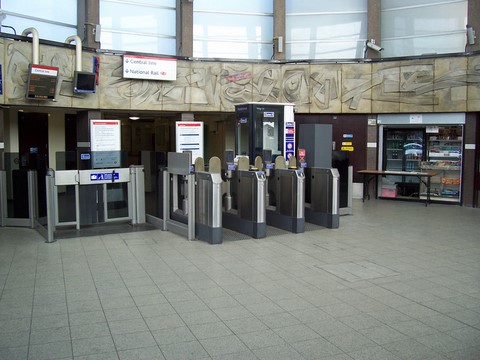 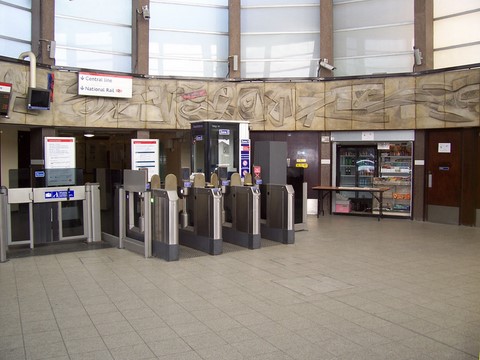 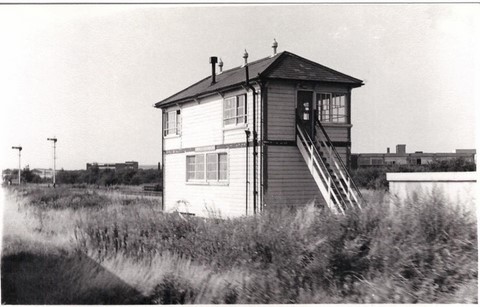 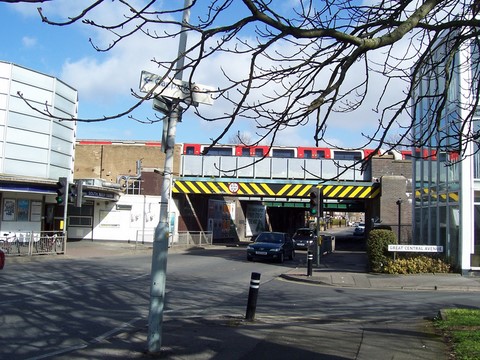 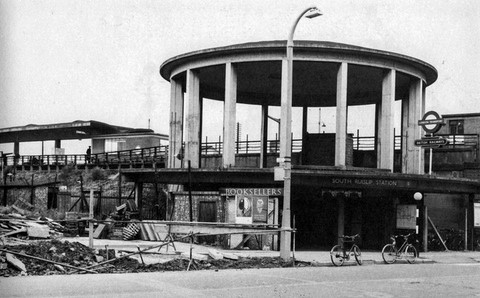 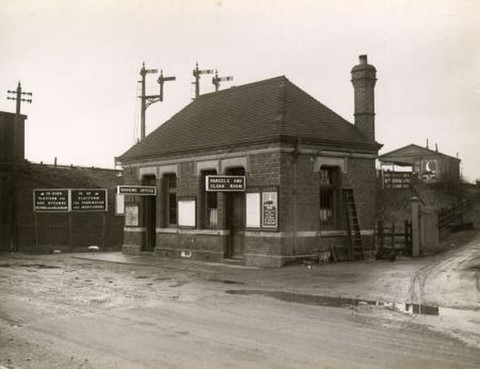 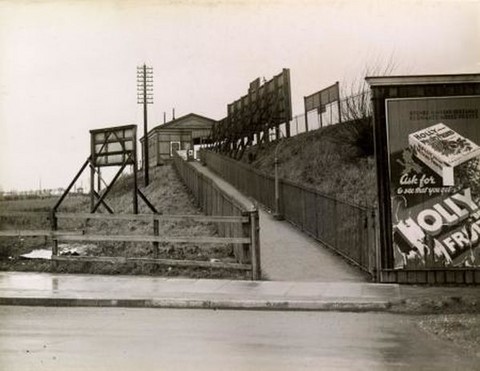