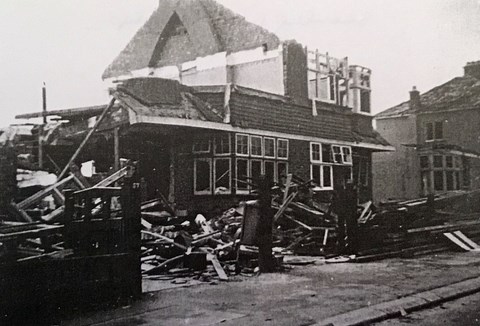 A message from a visitor to the site (slightly edited)
I've lived in Shenley Avenue for a long time and am very interested in a posting on the message board.

Our house was badly damaged by the parachute mine and was patched up by the War Damage Commission, for years after the war we had ceilings made of a sort of thin fibre board and a front door rescued from another house.

The bomb exploded at the back of the house probably when it hit the hedge that formed the boudary between the garden and he RAF Rugby Sports Field (now were Wealdstone FC play). Because the bomb did not impact the ground to explode there was no real crater formed.

Some of the window glass distorted the view like being in a hall of mirrors in a funfair!

The roof was held up with bits of timber just wedged in. It was "make do and mend" in those days.

Some houses in Shenley Avenue that were destroyed and rebuilt later can be identified by the lack of air vents (metal grilles) at ground level (usually two on the front elevation) that most Shenley Avenue houses/bungalows have. This is because they were rebuilt using concrete floors.
The first photo below is the back of my house 45 Shenley Avenue, our dog inky a scotch terrier hid under the stairs during bombing and had to be dug out of the ruins and the other pictures are taken of houses further up the street towards the bomb they are the fronts of the houses.
You can see several pictures of the damaged houses here