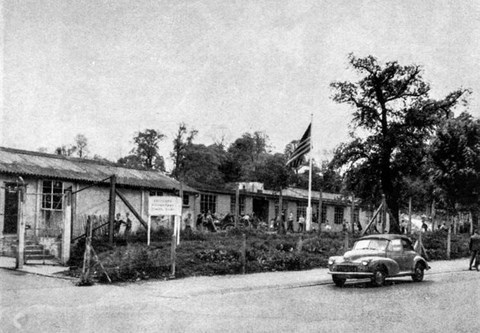 General Article written for and MOD Staff Publication
Many of our users have already visited this site, others are likely to come here at some time. Those who have may well have been surprised by the army-camp style of building we occupy, or by the location itself - some way from London, from a large town, and even some way from a main road.
The buildings themselves were built less than fifty years ago. The forty years prior to that witnessed the transformation of the sleepy villages of Eastcote, Ruislip, Ickenham, and Uxbridge into busy, developed suburbia.
The Domesday Book and the recently re-discovered 1565 Survey of the Manor of Ruislip give us an insight into Eastcote's more ancient history. Wlward Witt forfeited the Manor of Ruislip at the Norman Conquest. Ernulf de Hesdin (Hesdin Hall next to Sacred Heart Church named after him) then received the land (which included Eastcote - Ascott, as it was then known ) at the hand of William the Conqueror, but died 'before the walls of Antioch' in 1098, and the Manor passed into the hands of the Abbey of Bec. After the Hundred Years' war, the Bec lands were given to King's College, Cambridge in 1414, an association which lasted until modern times (1933), and by 1565 120 people held land in 'Ascott'.
Though London was only 15 miles away, roads were very poor and frequently flooded - even the coaching routes ignored Eastcote village. The end of the 19th century began to bring cyclists out to the area, and with them came tea-gardens, two of which were near to where the Black Horse pub stands. Developers began to take a liking to the area - and then came the railway..........
Eastcote station was opened (as a halt) in 1906 and from then till the 1920's tea gardens flourished as Londoners came in their hundreds to spend a day 'in the country'.  Ruislip and Eastcote, prior to the first World War, were the two most popular stops on the Metropolitan line.  In 1908, the Olympic marathon was run from Windsor to White City.   The route passed through the village and past the gates of Eastcote House  (which  stood  between  the  Black  Horse and  Case  is Altered public houses).  The summer of 1911 saw a series of cricket matches played by the Eastcote Institute on the site of the present Government buildings.
If 1904-14 was the heyday of Eastcote as a holiday resort, then  the  1920's  &  '30s  were  the  age  of  suburbia - of  'Metroland'.    Between  1911  and  1936  the  population  of Eastcote more than trebled.   Parcels of land were sold off for development,  and the first bungalow was built at the Computer Centre end of Lime Grove in 1935.
A footpath which existed as long ago as 1565 runs from Eastcote High Road - west of the Black Horse pub, through the middle of the Government site, passes the end of the Sigers and ends not far away at Field End Road.   This footpath would have run around the back of the old village. Now, it marks the boundary between Block 3 (the Computer Centre) and Blocks 1,2 & 4 (which are tenanted by American military  and  educational  sections  and  other,  non-DTI personnel).
The presence of this footpath caused some loss of privacy to a certain BJ Hall, of Field End Farm (now Tudor Lodge Hotel),  who requested permission to fence it off.   The local council agreed to this on condition that Mr. Hall be responsible  for making up the  centre five  feet  of the footpath's breadth along its entire length - for ever.  Mr. Hall, Council minutes reveal, actually agreed to this! 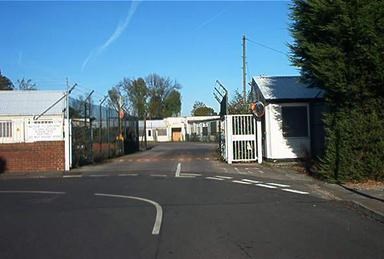 Entrance from Lime Grove (From Wikipedia)

At the onset of World War II the land upon which Blocks 1, 2  3 stand was owned by Lady Anderson.  She and her husband Sir John (a tea and rubber planter) bought Eastcote Place from a Miss Bevan in 1909. Sir John planted a holly hedge along the footpath which is apparently still visible in parts today.

South of the footpath most of the land as far as the railway (very approximately) was owned, after the enclosures of 1804, by one Thomas Truesdale Clarke, of Swakeleys House in Ickenham.  Ownership then passed from Mrs Cornelia Winter, to Mr William Lawrence, to a development company called the British Freehold Corporation, and, from the 1920's onwards the land at the top of Lime Grove was owned by Telling Bros.
With the outbreak of World War II the Government acquired the site under the wartime powers of requisition.   At this time it was a lovely meadow, with a five-barred gate at the Lime Grove entrance,  and a cattle  trough  in what  is  now the gateway, for the herd which grazed there.  A row of poplars have been replaced by the brick wall between the Assembly Hall and Kent Gardens, which was then allotments.

The  Eastcote  buildings  were  erected  as  one  of  several emergency  hospitals  built  in  anticipation  of  heavy D-Day casualties.  Luckily  it  was  not  needed  for  this purpose. Instead, the buildings were used as a barracks for WRENS.  In 1947 the Crown purchased the site - a fairly unusual move. From then on the site has housed a variety of tenants.   The Post Office used Block 3 from about 1950, and GCHQ used Block 2 and some spurs in Block 3 prior to their move to Cheltenham in 1954, but on the whole the work here at that time was kept fairly  quiet.    Then,  in  the  mid-1950's  the  site became extremely busy.  In order to move out of central London the American 3rd Air Force came to South Ruislip and established headquarters  there.
Nearly  all  their  requirements  were catered for within the South Ruislip base, but a US Services school was sited on the Eastcote site, close to the Eastcote Road.  (According to various sources Victoria Principal, late of Dallas fame, was one of its pupils.)

The  presence  of  the  school  encouraged  the  Americans  to utilise the site still further, and for most of the sixties it  also  housed a  zoonosis  (veterinary)  clinic,  a dental clinic, a mental clinic and a morgue.   The subject of some controversy  and  much  rumour,  the  morgue  was  the  last 'resting' place of American military personnel who died in Europe, prior to being flown back to the States.
Meanwhile, the Census Office was formed in about 1956 by the transfer  to  Block  3  of  the  Census  of  Distribution  from Neville House, and the Census of Production from Osterley. The site began to fill up. GCHQ left, but the Census Office, part of  the  then Board  of  Trade,  went  from  strength  to strength. The area which is now The Sigers was then a farm and  nursery.    Staff,  both  local  and  from  London  took advantage of the availability of allotments, and each Autumn a show would be held in the Assembly Hall of flowers, fruit and vegetables produced by Census Office  staff.There  was, too, a thriving choir, led by a Mr. Archer, who entertained in the Assembly Hall, which was variously used for crafts exhibitions,  carol services,  concerts, dramatic productions and of course Christmas dances.
The picture which emerges of the site at that time is of a sociable, friendly set of units. The BOT staff canteen was in the area north of the footpath, now inaccessible because of the increase in security. A good 600 people worked here in the Census Office days, and the seeds were sown, in 1957, of the site's main purpose today,  by the  installation of an Elliot  405 computer.   This machine,  which employed  first generation thermionic valve technology,  was  very large  in size but small in capacity and power.   Data was input via Power-Samas punched cards (with round holes instead of the more familiar rectangular ones, and only 45 columns).   The first computer project ever undertaken here was the analysis of the weight and destination of parcels - a far cry from today's varied tasks.
(In 1947, under the inspiration of TR Thompson, Lyons, the firm of tea-shops, started - with remarkable foresight - to take a  serious  interest  in applying digital  computing to their accounting and office work generally.   By 1954, LEO (Lyons Electrical Office) computers carried out 3 commercial jobs  for  Lyons  -  the  bakeries'  payroll,  calculation  of production and schedule dispatch to 150 tea shops, and  the provision of management information.)
The Elliot was replaced in 1963 by the tenth LEO 3 ever built. It  was  housed  in  H  Bay  (thought  by  many  to  have  been originally intended as the location for the Operating Theatre had D-Day proved more widely injurious), and, being a very advanced and powerful machine for its time, it aroused so much interest that a glass wall was built around it to allow for a viewing gallery. Data input was via Hollerith punched cards (rectangular holes, and 80 columns), and paper tape.  At this stage the purpose of the site's computing power was purely for Census Office work, but later the Department's Payroll system was computerised and run on the LEO, a huge undertaking.
The LEO worked on until 1971, when the Census Office had begun its move to the BSO at Newport. By this time, blind programmers were working here, punching programs onto cards by means of brailler keyboard machines.  Naturally, the guide dogs who have 'worked' here over the years have become firm favourites with the staff. The blind programmers still needed someone to read the output back to them, however, and this situation was only relieved in about 1977, when it became possible to print Braille at Eastcote on the ICL 1905E. A Civil Service course for blind programmers at Slough College used the Braille-adapted printer at Eastcote in helping to train other programmers.
A new computer hall housed an ICL 1905E, with an initial 32K words of  store,  from 1969  onwards.  The  big card  handling machines, tabulators, collators and sorters, which had taken up much of the bay were shifted to one side, and the computer was at the back of the bay, where Eastcote 2 now stands. Paper tape punching was moved to E Bay - now Reception - using a new type of punching-verifying machine.
In 1967 all the typing pools except that for the Census Office moved out of the Eastcote site.  There had been typing pools here  since  the mid-50's,  employing over 100  staff.   They returned in force, however, in 1973. There were nine pools, with 150 - 175 typists.   Currently,  three pools  exist at Eastcote for Insolvency work, and there are three pools for London overflow work, with fewer than 100 typists in all.
Responsibility for the management of the Computer Centre went to EO division (now MSM) in 1971, and whilst the BSO at Newport went from strength to strength, the Eastcote site seemed for a while to be very much the poor relation. Even with the acquisition of the ICL 1904S in 1976 the future of the centre was sometimes in doubt. Rumours abounded throughout much of the late seventies that Eastcote would be closed down.
Fortunately however, from a small handful of non-BSO users in 1971 the number of Departmental systems grew to its current total of 20-plus.
The 1904S was a stout workhorse, and was the unsung hero of several important activities, including daily Export Intelligence Service runs, the major Trade Mark and Patent Office systems and the analysis of Home Accident statistics. It was run by a master program known as EXEC,under the GEORGE 3 (GEneral ORGanised Environment) operating system. This allowed programmers remote access to the computer. Programs at this time still tended to be initially punched onto paper tape, but were then amended by the programmer at the terminal. The Job Control Programs were held on punched cards. The 1904S boasted 192K words of store, (Eastcote 4 has 96 megabytes - 600 times as


Footnote: - The whole site has now been demolished, flats and houses are built on the site
Wikipedia

You can see pictures of the site and of it being cleared for housing here.
You can read all about the site from an article written for an internal MOD Magazine (Cleared for publication!) here.

You can buy a book all about the site here

You can read memories of working at the site for former staff here.