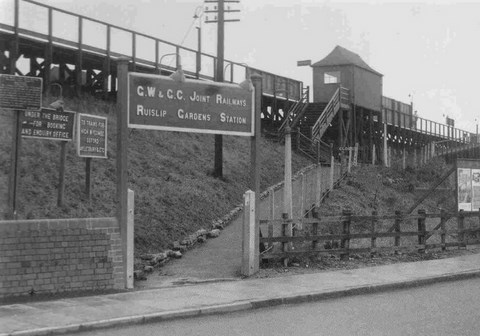 Ruislip Online would wish to point out that all the text below is copyright to London's Transport Museum and would wish to express unreserved thanks for their help in compiling this page. Why don't you visit their excellent web site?
Ruislip Gardens Station is on the Central Line. Chiltern Line trains do not stop here.
The station originally opened, serving the Great Western Railway (GWR) and London & North Eastern Railway (LNER) joint lines, on 9 July 1934. It was part of the massive suburban developments that spread out over the Middlesex countryside during the period. The construction of a new station, to serve the Underground lines, was begun as part of the GWR's contribution to the Underground's New Works Programme of 1935-1940. This projected Central line services on new electrified tracks parallel to the existing GWR lines.

Delayed by World War Two (WW2) the new station opened on 21 November 1948 but reconstruction was not completed until 1962. Adjacent, unreconstructed platforms still served main line services until 21 July 1958, since which date the station has only been served by Central line services. Many services start or finish at this station as it forms the access to the adjacent train depot  at Ruislip. During the 1980s the station was modernised as part of the Underground Ticketing System (UTS) programme. In late 1998, reconstruction work took place at the station including the replacement of the concrete canopy on the platform and renovation of the staircase area. 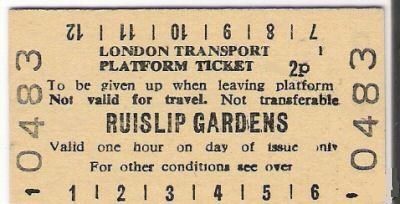 Although opened in 1948 the station buildings were not completed until 1962. 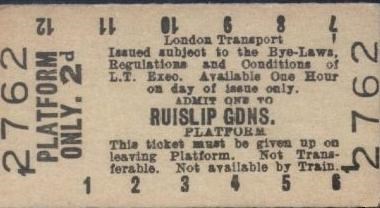 The station building is set below the original GWR railway viaduct, to the north, and is set back from West End Road to the south. The original 1962 small rectangular brick station building remains intact. It is said to resemble the temporary structure constructed for the opening of the station in 1948, more than the original 1946 designs of Curtis. The wall to the east of the entrance is faced with panels of Westmoreland or Broughton Moor slate (sources differ). The small cantilevered canopy with its illuminated name band fascia is original as is the pole-mounted 3D roundel symbol outside the station building. At the station entrance there is a kiosk window to the right.  The booking hall is rectangular and is lit by narrow horizontal clerestory windows. The ticket windows, barriers and access stairs are located at the eastern end of the booking hall and so are directly in line with the street entrance. To the right of the entrance the booking hall extends to house ticket and assistance windows and ticket machines. Although these features are not original the brick in-filling work required for their inclusion matches the original brickwork well. On the wall between the Ladies and Gents toilets is an early booking hall clock.

From the ticket office, past the barriers, a short set of stairs leads down to the original subway passage, which remains intact, although re-tiled with replacement flush strip lighting. Aluminium framed poster panels have largely obscured the original tiled poster surrounds. The subway leads to the access stairs which exit directly up onto the island platform. The timber handrails on these stairs are original and the central balustrade is an early example. 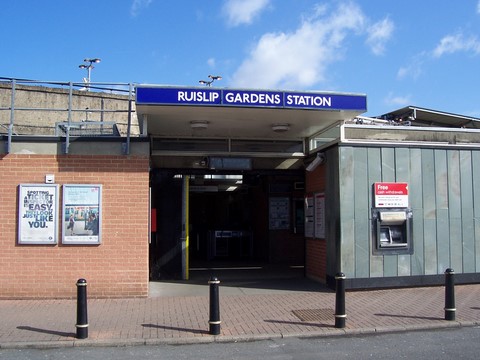 The platform is an island type and remains largely intact. It is covered by a concrete 'winged' canopy, which is supported centrally on tapered columns, although these have been painted red whereas originally they would have been a lighter tone. The winged canopy is still impressive architecturally but it  emphasises the modest nature of the actual station building, compared to the grander design Curtis had envisaged which would have sat better with the platform design. The flush strip lighting now visible replaced the original strip-light fittings. The pole-mounted station name roundels are not original. Those visible now are mounted on steel poles. Originally these were station name roundels mounted in vertical concrete slabs with an integral Y-shaped light above.

On the platform is a single-storey brick unit, at the eastern end of which is a glazed waiting room. The tiling within the waiting room is not original and none of the seating, either within the waiting room or on the platform, is original. The platform clock, near the waiting room, is original (although the hands and face have been replaced), as are the bronze framed route diagram signs which feature the two feathered arrows through a circle design. The platform indicators are also worthy of note as the fixing brackets are original and the signs themselves, though not original to the station, are replacements of a very early type.
Footnote: This information was correct in 2005 and changes may have been made to the station since.