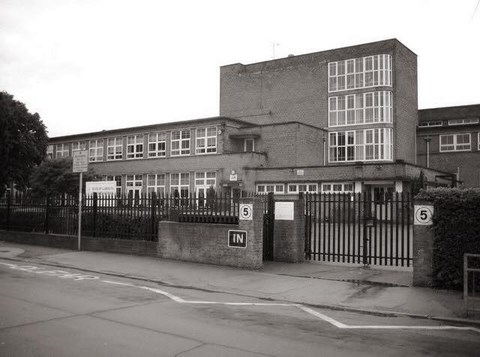 Ruislip Gardens JMI School was planned by the Middlesex County Council Education Committee in 1934, to serve the new housing estate being built on the Ruislip Development Company's land near the newly opened Ruislip Gardens Station, For centuries that land had been part of Tybber Field, one of the open fields of Ruislip and had been allotted to Thomas Truesdale Clarke of Swakeleys at the time of the Enclosures in 1804-14. During the years that the area upon which Ruislip Gardens Estate now stands was part of Swakeleys, it had been farmed from Hill Farm in Orchard close by members of the Ewer family. The Swakeleys Estate was auctioned in 1922, mainly for building development.
On 28th August 1934 the District Valuer reported to the county Architect that the site was in the north-west corner of the company's estate and as building was progressing from the south- east it was among open fields. The total number of houses permissible would be 809 and the selling price was £ 2050. An early purchase was recommended. The decision was taken to buy the ground with two more house plots to increase its size, for £2250 in April 1935.

Building began in 1939. Miss D. Lucas was appointed headteacher in July and it was hoped to open the school in the autumn. When upon the outbreak of war on 2nd September 1939, the other new school nearby, Bourne Senior, was commandeered by the RAF, the Middlesex County Council Education Committee stopped building at Ruislip Gardens until a guarantee was received from the government that it would not be taken over. Work then continued and the school was opened on 3rd June 1940, only to be closed again three days later, because it was in the danger zone around Northolt Aerodrome. The school started again on the 20th June. Miss Lucas later wrote about the early days:

"When we started the playground had not been asphalted. There were enormous piles of what is known as hard-core for making it so that when it rained it looked like mountains and lakes. There was a little grass at the back were the children could play when it was dry. Otherwise they had to use the halls. In the area where the canteen now stands there were six air raid shelters. The reason we had to wait a long time for the playground was because so many men were in the army there was a shortage of labour. When we started we had one male teacher, but he was very soon called up for the army.
The children soon settled down. They had lovely classrooms , hot and cold water in the cloakrooms and beautiful new books, even if there was a shortage of furniture. They grew used to the noise of the aeroplanes and when they heard the air raid siren they just picked up the things they wanted and were ready to go into the air raid shelters.
One other drawback was the school was not there when schools had to register for milk. The children paid for it in those days. I contacted the Horlicks' Company and they were most helpful. They not only sent me a big mixer and kept me supplied with Malted Milk, but also sent me a large box of little mugs for the children to have for their use. When our first Christmas drew near with the help of parents we were able to arrange a Christmas party and also procured a huge Christmas tree, which stood proudly in the entrance hall."
After a further closure due to flooded shelters at the end of 1940 (See Chapter 6), the school continued to function more or less normally, though with the first floor given over to Bourne Senior School from 1941-46.
When the war was over the field in front of it was taken over by Acton Council to provide houses for Acton people who had been rendered homeless. The houses built then, now belong to the Borough of Ealing. Miss Lucas recorded that the children who lived in them had come from many different schools, but soon settled down, "after a few fights among the boys at first."
THE CHILDREN
An H.M.I. Report of September 1949 mentioned the "cosmopolitan nature of the school" due to many pupils having come from distant parts of the country and from abroad, as their parents had found work in near-by industries. This trend was likely to continue as still more houses were being erected to provide homes for essential workers in these industries.
The H.M.I.'s expectations were realised for many children of personnel at RAF Northolt attended Ruislip Gardens and accounted for more than 50% of the pupils in the 1970s, when two coaches transported them from the Married Quarters at West Ruislip.
The H.M.I. thought very highly of the school, finding that the children showed "a refreshingly natural approach to experiences and a delightful frankness. They have been trained to respect the building and its surroundings; this is strikingly shown in the way in which they use the receptacles provided for litter in the playground."
Numbers had grown to nearly 700 by the end of 1949, so the school was divided into separate departments, with Miss Allcock as first headteacher of the infants' school and Miss Lucas continuing as head of the junior school. Miss Lucas retired at Easter 1955.
Numbers had grown to nearly 700 by the end of 1949 SO The school was divided into separate departments, with Miss Allcock as first headteacher of the infants' school and Miss Lucas continuing as head of the junior school. Miss Lucas retired at Easter 1955.
BUILDINGS
The buildings have remained relatively unchanged externally and still present the clean, uncluttered lines of Middlesex County Council schools of the late 1930s. The internal arrangements have been altered many times to fit varying numbers of children and to suit changing educational methods. Modern pupils spend much time on practical activities in small groups and require more space than their 1940s counterparts. With falling rolls (in 1991) there is plenty of room for all kinds of interesting work.
The infants' school has five classes, a secretary's office, a library and a mother and toddlers' room. The junior school also has five classes, with former classrooms converted to a music/drama room, a resources room and an open-plan library in the middle of the classroom corridor. Both schools have medical rooms.
There is a web site for the school here
There is a Facebook group for former pupils here
We have our own message board for this school here
There are loads of old pictures old from the school here

I was at Ruislip school in the 1940s.  I remember the Lambert twins they were always getting in to fights.

I remember the school as a happy place but Mr Walker was a hard head master.

One of the teachers used to tell us stories  about a wartime pilot who used to have a long thumb nail and used to tightened the screws with it as his aircraft fell to bits. She was a good story teller.

Terry WagnerI was at Ruislip Gardens school when it opened in 1940. Mr Walker was headmaster, caning was still practiced, usually six strokes on the hand. Was taught at Bourne school while Ruislip Gardens school was being built. About six shelters were constructed on the left of school. During air raids, lessons were continued in the shelters. Lived at Trevor Crescent and have many happy memories of the school. Would love to visit some time. Am living Charlton Kings Glos.