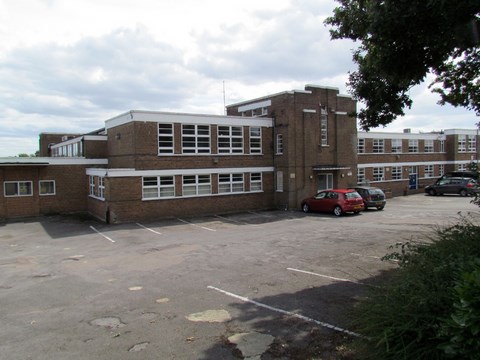 The economic troubles of the 1930's brought many northern builders down to London to try their luck in the rapidly expanding suburbs. New stations on the Metropoliton line made the area a target for such speculative building. In 1933 a station opened in Joel Street. Its name - Northwood Hills - was the winning entry in a competition held by a local newspaper. Soon more houses were built along Joel Street and the Pinner Road. The consequent increases in population made it necessary for the Council to open a secondary school in the area to ease the pressure on the existing school in Pinner Road.
On 29th January 1934, Potter Street (New) Senior Council School was opened with 199 pupils aged between 11 and 14 and 7 teachers. The headmaster was Mr. A. T. Smith previously head of Manor School, Ruislip. The curriculum was narrow in comparison with today, being merely an extension of elementary education. There was an emphasis on English and arithmetic, technical subjects and physical education. Pupils whose circumstances permitted them to pursue a more academic education and who would wish to attend school until they were 16, were encouraged to take the entrance examination for the local county secondary school in Harrow.

During the years leading up to the war, a newspaper article commented on the appearance of the school as follows:

"... the school and its grounds today contribute what is probably the most pleasant vista in the whole of Northwood Hills. The spacious playing fields stretching up the main road always seem in tip-top condition, the wide expanse of grass is wonderfully restful to the eye, and when the boys are out in their white shorts doing physical training, they provide a spectacle well worth seeing. It seems a strange commentary on the rapid urbanisation of this part of the country that the education authorities have supplied a new amenity while the speculative builders are doing their best to obliterate the fields of a few years ago."

By the time war broke out, the school roll had doubled to 400 pupils. A shortage of air-raid shelters meant that only 80 children could attend school at any one time, and a rota was established so that each child could attend one day a week. Schooling was further disrupted by frequent air raid warnings which reached a peak in the autumn of 1940.

The war had a positive effect on the school, however. A telephone was installed in 1939, and a school canteen was opened in 1942. Many boys worked on the allotments created in the school grounds. The school National Savings Association had over 200 members at this time. The school provided a service to the community by standing by as a rest centre in case of urgent local need.

After the 1944 Education Act the school was known as Northwood Secondary Modern School and extended its range of subjects.

On 12th September 1961, an extension to the school was opened. This included the Hall, Library and Art rooms and a further extension was opened officially in October 1975 by former headmaster, Mr. Ball. By this time the school had become comprehensive, and it received its first fully comprehensive intake in September 1977.
The school has a much wider curriculum now than in its early days and pupils travel further afield.

There have been visits to the USA, skiing in Austria, cruises in the Mediterranean, visits behind the Iron Curtain to the USSR. A strong tradition of music and drama has been built up and a large proportion of students stay at school until the age of 18 and seek university entrance -something never dreamt of in 1934.
FOOTNOTE
Since this piece was written the school has been demolished and new buildings erected. Operationally the school has merged with Queensmead in South Ruislip.

There is a Facebook group for former pupils here