Murder In Ruislip of John Brill in 1837 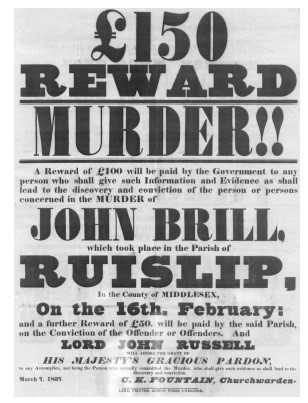 In 1837 a 15 year old boy was found savagely hacked to death in a wood near Ruislip. The crime remained unsolved until 1844 when an informant provided new evidence. But was it too late – and was he telling the truth?

In 1837, John Brill, a lad of 15 years was murdered in Ruislip. A poster and accompanying letter advertising a reward of £150 to be paid by the Government, to any person giving evidence which would lead to the discovery and conviction of the murderer/s of John Brill, were recently discovered among the Home Office Records in the National Archives at Kew. An account of events leading up to the murder appeared in Bell’s Weekly Messenger (27 February 1837) and other contemporary newspapers. On Thursday 16 February, John Brill, an employee of local tenant farmer Charles Churchill, was sent out to fill gaps in the fence around Youngwood. He was also instructed to keep an eye open for poachers. When he failed to return home in the evening a search with lanterns was begun, continuing on the Friday. On Sunday a body was found by farm worker James Lavender in a hollow in a remote part of the wood. The clothes were in disorder and the face was covered with dirt. Blood had flowed from a severe blow under the right ear and about six yards away the boy’s bill hook and cuff were found, and also his cap on a white thorn tree. There were marks in the ground as if the deceased had staggered before he fell.

Acting on information received, County Magistrate Thomas Dagnall issued warrants for the apprehension of Charles Lamb, Thomas Lavender and James Bray on suspicion of having been involved in the murder. At 12 o’clock on Monday morning at the King’s Arms Hotel in Uxbridge, Mr Dagnall and Sir W.S. Wiseman examined Charles Lamb in private. The next day Sergeant Otway of the A Division was sent down to Uxbridge by the commissioners of police at the request of Mr Shepherd of Craigs Court, Charing Cross, the owner of the wood and by Mr Lewis of the Stamp and Tax Office, Somerset House, the renter of the game, to help Shackle the Bow Street officer and the Uxbridge constables in the collection of evidence and the discovery of the actual perpetrators of the murder. They prosecuted their inquiries until a late hour and resumed early Wednesday morning, eventually obtaining further circumstantial evidence against Charles Lamb.

Two months earlier, Thomas Lavender and James Bray had been brought before magistrates at Uxbridge petty sessions charged with poaching on the grounds of Ralph Dean Esq. of Ruislip. Young John Brill had given evidence against them, and threats of violence were uttered against him by the prisoners and their friends.

Mr Dagnall and various local dignitaries went to view the spot where the body was discovered. They found that the place in Youngwood, which ‘adjoins a wood called Mad Bessy’, was covered by thick underwood which was five feet high and almost pathless.

Returning to the Six Bells PH, 23 gentlemen were sworn in as a jury by the Coroner Mr Stirling. They included the Churchwardens and Overseers of the Poor, with the Reverend Christopher Packe as their foreman. The jury examined the body and noted a severe bruise under the left ear and a mark of a heavy blow on the left temple. Mr Charles Patten, an Uxbridge surgeon, carried out the post mortem. After dissecting the skull, he deposed that a blow to the left temple would cause an effusion of blood mostly on the right side. The deceased’s death was caused by an effusion of blood on the surface of the brain (a cerebral haemorrhage in modern terms). A blow from a stick or flat instrument was more likely to have caused this than a fall, as the ground was soft and the body was not in a position which would have resulted from a fall.