Murder In Ruislip of Jean Townsend in 1954

Murder In Ruislip of Jean Townsend in 1954 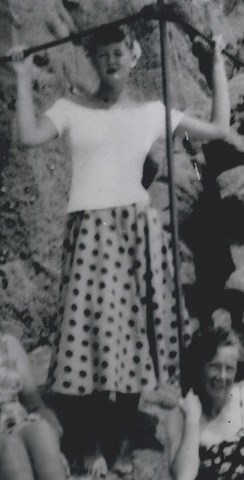 The Murder of Jean Townsend, (born c. 1933) is an unsolved murder case from Ruislip. Townsend was a 21-year-old English woman who was murdered in September 1954. Despite an extensive police investigation, no one has ever been charged with her murder and the case remains unsolved.

Jean Mary Townsend lived with her parents at the family home in Bempton Drive, South Ruislip and worked as a theatrical costumier in London's West End. On the evening of 14 September 1954 she attended a social function in the West End, returning to South Ruislip later that night on the last Central line train. At around 11.45 pm she was seen leaving South Ruislip station and walking alone along Victoria Road. Her body was discovered the following morning on waste ground to the north side of Victoria Road, near to the junction with Angus Drive in the area now occupied by St Gregory the Great Catholic Church (opened in April 1967). The autopsy report stated that she had been strangled with her own scarf and it was reported that - despite various items of her clothing being removed - there were no signs of sexual assault.

Local suspicion fell on American servicemen based at the nearby South Ruislip Air Station. The rumours of an American being involved intensified when a resident living near the scene reported hearing a woman cry for help late on the night of the murder followed by two male voices arguing, one of which seemed to have an American accent. Subsequent rumours of alleged reluctance on the part of the USAF authorities to co-operate with the Metropolitan Police in the murder enquiry served to heighten local suspicions.
In the wake of the murder, a number of women came forward to report being approached or accosted by strange men in and around the area where Jean's body had been found in the days preceding the murder. One of these, a Miss Jacqueline Cliff, told reporters how she had been approached repeatedly by a man - aged about 30 with a high forehead - who spoke with an American accent and drove an "American-type" car. Another young woman, Joan Gala, reported being attacked by a man late at night on Victoria Road on the Saturday before the murder. Her description of her attacker included the fact that he had a high-forehead. It was reported that several young women had been murdered in West Germany in similar circumstances in the early 1950s, with their bodies left by the side of the German autobahnen. 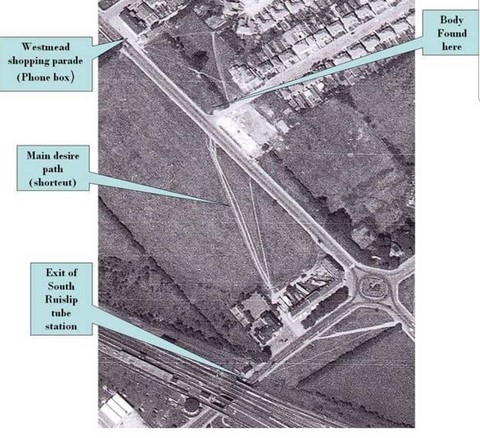 Suggestions that US (or British) servicemen stationed in Germany might have been responsible prompted the Metropolitan Police to liaise with their German counterparts, but the idea of a possible link appears to have been quickly discounted. Meanwhile, some local residents responded by organising patrols to escort women to and from the station late at night.

At the inquest the coroner expressed his surprise that - apart from the obvious symptoms of asphyxiation - there were no signs of a struggle or that Townsend had physically resisted her attacker. Interestingly, another young woman - Ellen Carlin - had been murdered in London earlier that very same month. Carlin was alleged to have been working as a prostitute in Pimlico and was strangled shortly after being seen with a man in a US Air Force uniform. Whether the Police suspected that the two killings were linked is not known.

Some three weeks after Jean Townsend's murder, a Mrs Doris Vennell reported being followed and attacked by a man outside North Harrow tube station (on the Metropolitan line and approximately 3 miles from South Ruislip station) while returning home just after midnight. Her attacker had boarded at Baker Street and sat watching her intently until following her off the train at North Harrow. Mrs Vennell challenged him and managed to get away, but only after a struggle during the course of which she tore some buttons off her assailant's coat. Once again, the man was described as having a high-forehead.

Three years later, in 1957, a young mother called Muriel Maitland was brutally murdered in Cranford Woods near Heathrow Airport (a few miles from Ruislip). It was reported that Police considered the possibility of a link with the Townsend case, but it seems that nothing came of this.

There has now (2019) been a book written about this murder. Read more here