Gas de-contamination centre, later church hall and in 2021 a dance studio. Built in 1941 by Ruislip and Northwood UDC to counter the expected gas warfare on civilians.

The style is derived from Dudok. Built of reinforced concrete clad in wirecut bricks in English bond with metal-framed casements and flat roof. L-shaped on plan.

Mainly one storey but two storey tower to west.

Brickwork around the windows shows signs of fixing for external shutters.

INTERIOR: North part has toilets on either side of door, small room on east side, larger room to west with triangular shelf and double wall opposite probably acting as an airlock with two cupboards with shelves for clothing.

There is a long room with three concrete roof girders which leads into two separately accessed rooms at the south end each with outside access. The long room probably had partitions originally. Wooden parquet floor probably added later. Layout of the gas de-contamination centre would have included an undressing area, eye douche and showers, drying rooms and dressing rooms.
Text above taken from WWII Talk

Front View of the Building 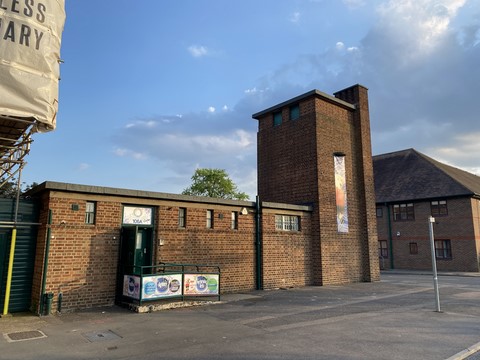 Side View of the Building 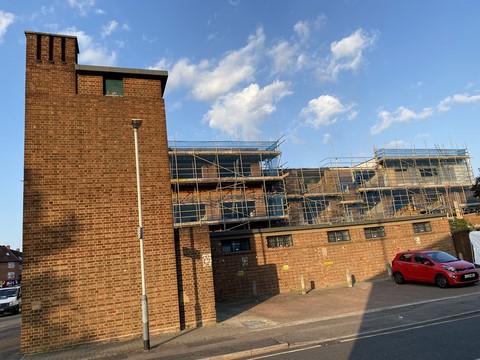 Note the scaffolding is on a building behind