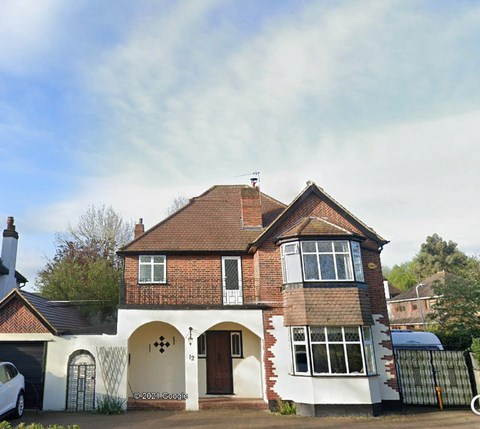 Picture: Assumed property once used for the school from Google Earth
(Opening comments from a Ruislip, Northwood & Eastcote Local History Society publication from 1992)

MEADOWSIDE SCHOOL: Pinn Way, Ruislip
Although advertised in the local press as having been established in 1930, the report mentioned below says that this pre-preparatory school opened in 1938. It was situated in a house standing on the corner of Pinn Way and St. Martin's Approach. the principal was Miss M. G. Girling. It is believed that the school closed in about 1953.
The following information has been extracted from a School Inspector's report of an inspection made on 8th December 1951:-
Premises and Equipment: The dining room of the principal's house was used as a classroom by class one, the older children. Lessons were taken at the dining table. A classroom had been added to the house for teaching purposes, and a folding partition divided this room to provide accommodation for classes two and three, the young ones. The furniture here was mostly small size dual locker desks, which left little room for independent movement by the children.  The internal decoration was attractive, and lighting and heating were adequate and suitable. The classroom proper had a small cloakroom attached with one W.C. and two further W.C.s were available in the house. There was no paved playing area, but in good weather, a lawn was used for outdoor play. There was a piano in the classroom and there were toys, useful apparatus and teaching material.
Staff: The principal had no formal teaching qualification, but some years previously had passed part one of the Froebel Exam. Before opening Meadowside School, she had been principal of Arnwood School, Kenton, and prior to that, had taught in several small independent schools. She was assisted by two unqualified teachers, who each taught every morning and for two afternoons a week. A visiting teacher taught dancing. The principal was also assisted by a student, who had applied for admission to a recognised teacher training college.
Pupils: 46 children on the school roll - in class three were twenty children consisting of one five year old, two aged three and seventeen four year olds.  Class two contained sixteen children aged five to seven years. Class one had eleven children consisting of ten aged six to eight, and a handicapped ten year old, there at the request of his parents who had been unable to obtain a place for him in a special school.
Curriculum; School hours were 9.30 a.m. to 12.15 p.m. and 2.00 P.m. to 3.30 p.m. Classes two and three spent the mornings reading and doing number work. Cursive writing was also taught from the time the children began to write. At the end of the morning, the partition was folded back, and these two classes were grouped for a short period of music.  Percussion band instruments were used.   In the afternoons, the children concentrated on painting or drawing with crayons, and simple forms of handwork. Class one, the older children, followed a planned timetable, although efforts were made to cater for the needs of individuals. The children did reading, writing and used various aids such as a toy shop to make their number work as realistic as possible.  They were taught simple studies in geography, history and nature study. Time was also spent on art and crafts. In fine weather the children had P.E. and games on the lawn, and sometimes a nature walk. On Wednesday afternoons the school was closed, other than for dancing, an optional subject.

(Those children requiring dinner were provided for in a Ruislip restaurant. The school had an arrangement with the proprietor who supplied meals at ls.9d. (approximately 9p each. The teachers supervised the children at dinner.)

Comments: The school inspector reported that classes two and three were making fair progress in reading and numbers. However, there were difficulties in class one because of the wide range of age and ability. In the circumstances, those children were making very fair progress in reading and writing, but the inspectors considered that in spite of the principals creditable efforts, the standard of work in some subjects fell below that normally obtained with children of comparable ages taught in more suitable conditions. On the positive side, the report concluded "A happy little school in which the children obviously enjoy a sense of security under the kindly care of their teachers."
I was a pupil at Meadowside, as were my brothers David Jones and Colin Jones.  I started in 1941 and left in 1944.  As I remember it, it was Mrs Girling, she had a son who helped with teaching around the time I left.  Miss Bearley was one of the teachers.  I remember once the school being closed because the Pinn flooded and came back up through the toilets. (Wendy Jones)