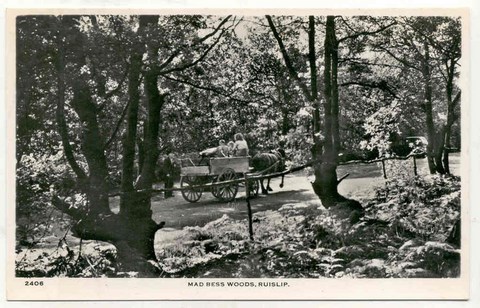 An interestingly named place, and one of those perennial questions that comes up on the notice board from time to time, "why is Mad Bess Wood so called?"

Before we even get to that where is it? Well to access it you need to leave Ruislip on the road to Northwood, called Bury Street where it leaves from the bottom of the High Street. Near to crematorium/Six Bells the name of the road changes to Ducks Hill Road, though throughout its length it is the A4180.

Passing the Six Bells in you begin to climb a long hill. Just back from the brow there is a small turning to your left, turn here and you enter the car park for the woods. There are pedestrian lights here which are very unusual as there is a "stop" button at a height suitable for those on horseback to push!

The woods themselves consist of 188 acres and were formally owned by Sir Howard Stranson Button before being acquired "the council" by way of a compulsory purchase order in 1936. This purchase was made in order to form part of  the newly thought out "green belt" around London, up until this time it had been thought that they would be built over.

Reference to an A-Z road atlas reveals that there is, within Mad Bess Woods itself Mad Bess Wood Cottage, and also "North Riding Wood" and "Young Wood" (Youngerwood), though these names are never used and the whole wood comes under the "Mad Bess" banner locally. Other sections named separately included Standell's Wood and Censor's Wood, but these sections seem not to get a mention in the A-Z.

The aforementioned cottage can be more easily accessed from Breakspear Road North on the way up to Harefield by the sharp bend just before the entrance to Bayhurst Wood County Park (So grandly named because it has a few picnic tables!?). The area by the cottage is (was?) run as a camp site. The cottage was that of the game keeper in the late 1800's.

Please note that barbeques are NOT allowed in any of the local public open spaces including Mad Bess Woods.
See the exact location on a map here

So to that name.

Well if we look in Eileen Bowlt 's excellent book Ruislip Past, (which just might be available via this web site courtesy of Amazon, and if not send me an e-mail and I can point you to a seller) we find out that there is not an answer to this question!

"Here is an intriguing name, but alas, with no explanation of its origin, although many have been made up by fertile imaginations"

Now as this lady is the local historian who is Ruislip Online to argue?

Such fertile imaginations have, however, come up with the ghost of a headless horsewoman most often......so for those wanting a reason this vision certainly fits the name!

But hang on, the Watford Observer states, with some authority:-

Mad Bess was the wife of an 18th Century gamekeeper, a demented old woman who prowled the woods at night looking for poachers. "Beware Mad Bess" was the poacher's motto, with good cause, by the sound of it.

(In 1837 15 year old John Brill was murdered in the woods, so there maybe at least one ghost in there!)

One visitor told us his memories of the area....

I have fond memories of Mad Bess Woods.

As a young boy living in South Ruislip I had joined the 1st South Ruislip Cub Scouts, in Manor Gardens. We did the usual Bob-a-Job round and collections for jumble sales locally to raise money for the scout troop this enabled us to travel far and wide camping in places like the White Cliffs of Dover, Gilwell Park and of course Mad Bess Woods!

Early one Saturday morning we marched from South Ruislip through Ruislip Gardens and Ruislip to Bury Street our troops flag being carried at the front and the rest of us taking it in turns to push and pull our two wheeled wooden camping trailer with all our kit in it. On arriving at Mad Bess Woods the first thing that we were aware of was the crematorium next door to the camp site with the chimney belching smoke from its tall chimney!, after listening to all the Mad Bess stories told to us by the older lads on the way this was a scary sight to behold.

We set up camp and gathered round the camp fire to enjoy our hot soup then it was decided we would have a game of tag! It was dark by now and the only light we had was from the full moon hanging spectacularly in the night sky. We were separated into two groups seniors and juniors I was a junior. With the vision of the headless Mad Bess firmly imprinted in our minds we were sent off to hide! The Seniors were soon on our trail my friend and I were soon spotted and the chase began! Short trousers and brambles are not a good combination when running through the woods in the dark! My legs were scratched and bleeding and after what seemed like an age I was final tagged, scared, exhausted and bleeding I'd lost my friend and all sense of direction, in a blink of an eye the seniors were off in pursuit of another petrified Cub Scout, leaving me to try and find my way back to camp.

The woods were filled with the screams and shouts of others being chased and tagged, scared half to death I stumbled about the woods in the dark until I found my way out and back to camp, what a sense of relief I felt! I was about 10 at the time, I'm 63 now but that memory of Mad Bess woods is still fresh in my mind!