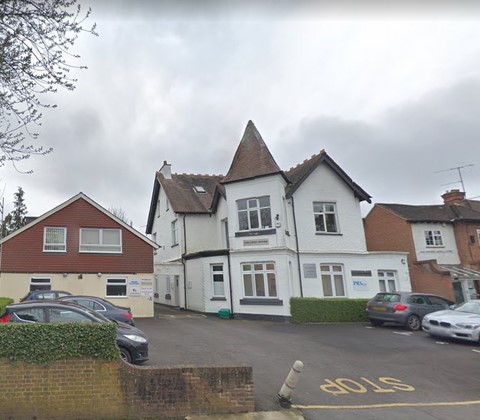 (Opening comments from a Ruislip, Northwood & Eastcote Local History Society publication from 1992)
Kelvin House School, one of the earliest private schools in Ruislip, was founded in about 1914, by Mrs. Aileen Mary Todd, wife of the Reverend James Cameron Todd MA, and she remained head for over 21 years. The school was advertised as a high school for girls and a boys preparatory school. In April 1935, Mrs. Charis Weare Brophy BA who had joined the school in September 1934 as senior assistant, took over as head, although Mrs. Todd retained financial control of the school.  Mrs. Brophy, a graduate of Liverpool University, had previously taught at schools in Jarrow, Liverpool and Acton. She was married to John Brophy, the novelist and critic. In 1937, an application was made to the then Board of Education for the school to be placed on the list of preparatory schools recognised as efficient. Unfortunately, following a School Inspection, the application was rejected. Few details have come to light about the subsequent history of the school. The latest reference so far found is a newspaper report of Kelvin House School's annual prize giving, which was to be held on 23rd February 1939 in the school hall. "Mr. Conal O'Riordan has kindly consented to distribute the prizes after which a performance of 'The Tempest' will be given by the pupils." It is understood that the school was evacuated early in the Second World War, but it is not known to where, or whether the school ever returned to Ruislip.  By 1954, the building in King Edwards Road was occupied by St. Bernard's School, which had transferred from Poplars Close.  It is now business premises occupied by several firms.

The following information has been taken from the School Inspectors' report of an inspection made on 1st and 2nd March 1937, which lead to the recommendation that the school not be recognised as efficient:-

Premises and Equipment   There was a large well-equipped gymnasium, which doubled as an assembly hall. The platform was partitioned off to provide a classroom. At the rear was another classroom and cloakrooms with four W.C.s and four washbasins. The house itself contained the Head's living accommodation, together with a ground floor room used as a classroom by the upper school and a similar room on the first floor used for the kindergarten. There was also a small staff common room. A small asphalted court in the garden was used for recreation, and for organised games, the school rented a playing field about ten minutes walk away.  (Described as "small, rough and apparently undrained!")

The supply of text books was "very fair", although some were out of date. There was a school fiction library. The stock of wall maps was good, but there was no other equipment for geography or science. School furniture was "about average".

Staff The head, Mrs. Brophy was described as "sensible, a good teacher on somewhat old-fashioned lines, has high ideals and teaches rather for the love of it, rather than for what she makes out of it." However, there was a slight criticism that she
lacked special knowledge of then current junior school teaching. She taught mostly French and English. She was assisted by Miss Ridley and Miss Morgan, who were both unqualified, but had taught at the school for over five years, and Mr. Viney, a graduate, who had been at the school for less than a year, and had a year's teaching experience elsewhere. His subjects were mathematics, geography and nature study.  In addition, there were four qualified visiting teachers:- Miss Hutton taught p.t., Mr. Roife music and two others taught elocution and dancing (both optional subjects). Staff salaries were as follows:-

The elocution and dancing teachers received two-thirds of the fees paid by the children.

Pupils:- 77 children (all day pupils) - 21 boys and 56 girls. The age of the pupils ranged from 5h years up to 15h years. Only four pupils (all girls) were over 14 years and of these, one was intending to take School Certificate in July, and one was going on to St. Paulas School. Of the 13 girls who had left the school aged 14 or 15, since July 1935, four had finished their education there, seven went on to other schools (mostly recognised and grant earning schools) between the ages of 11 and 14, and two went on to such schools at 9.  Of six boys, two went on to secondary and four to preparatory schools. Nine children whose parents were mainly connected with the Air Force had left the district and the school at various ages. However, most pupils entered the school at an early age, and remained. The school was described as "the only one of its kind in the district, and undoubtedly satisfies a local demand".

Curriculum; The school was divided into Kindergarten, Forms I, II and Upper School. Each form had a two year syllabus and careful schemes of work had been drawn up.  There was some grouping of forms for part of the work. The inspectors/ comments on the standard attained in each subject are set out below:-

History and Geography: Attempted on right lines, but progression in work very difficult.

Physiology:  Unsuitable academic work, which on discussion appeared to be introduced as a cover for sex instruction. Headmistress advised to drop it as a school subject, and to substitute either observational work developed from nature study or simple physical work in close correlation with geography.

The school had its own Wolf Cub pack and Guide company. Pupils were taken sometimes on school trips, which had included a visit to the London docks to see a liner, and to the Old Vic for a play by Shakespeare. There was an annual school camp (not under canvas) for a week in the summer.

No school dinner was provided, but a few pupils were taken by a teacher to a neighbouring cafe.

Comments: The inspectors considered that in the kindergarten and forms I and II, the general standard of work was up to the average, although there was criticism in handwriting where "excessive and premature written work was having a bad effect". In the upper school, three groups of children of different ages and widely varying levels of ability were taught simultaneously and this had lead to a lowering of the general standard. The teaching seemed to be directed to the most senior group, who were sitting entrance examinations to schools such as St. Paul's and the other groups were being asked to attempt work that was far too advanced for them. The result was disappointing compared to the work done lower down the school. The inspectors considered that the upper school should be divided into two forms which would mean a further member of staff would be required. The Board of Education in responding to the school's application for recognition as efficient conceded that the school was doing good work in many directions, but considered that it was inadequately staffed, and this had lead to defects in organisation, which in turn had had a detrimental effect on the standard of work in the upper school. It was recommended that an additional member of staff, preferably qualified to teach languages, should be appointed, and if that were done, the Board would entertain a renewed application for recognition as efficient after two years or so from the date of the new appointment. It is not known whether the recommendation was ever carried out by the head.

A visitor to the site has offered the following:-

"It was a small private school just off the High Street - can't remember the name of the street it was on (it was at 17 King Edwards Road ROL). They wore a red and black uniform.  I think it may have been run by someone called Brophy. I didn't go there myself but knew one or two children who did.   It closed during the war and one or two girls came to Ickenham High, where I was then a pupil."

My mother, Heather Carter (now Davies) has given me the following notes about Kelvin House, which she attended 1924-1935:
Divided into four houses - Livingstone, Shackleton, Nelson and Wellington. Keen competition. Awarded points for and against good and bad behaviour.
Weighed and measured every term.
Had to gargle and have a clean handkerchief every morning.
Fully equipped gym and teams entered for national competition.

Played netball and cricket.
School concert on Empire Day.
Procession to church (St Martin's) on Ascension Day with banner.
Hot or cold milk provided every break time.
Lunch at school - supervised by a maid in cap and apron - very old.
Strict discipline. made to stand on platform before the whole school - with placard announcing the misdemeanour. One boy made to wash out his mouth with soap and water for saying 'damn!'
Another made to go down the street with bucket and brush washing off graffiti he'd done on the fence.
A wonderful serene and happy place - under the Headmistress Mrs Todd- the founder. Never forgotten.

Now at Kelvin House we have this little rule
play the game.
Always try to be a credit to your school
play the tame.
If knaves delight in cunning
They don't always win the running
And it others try to shuffle
Why should you? 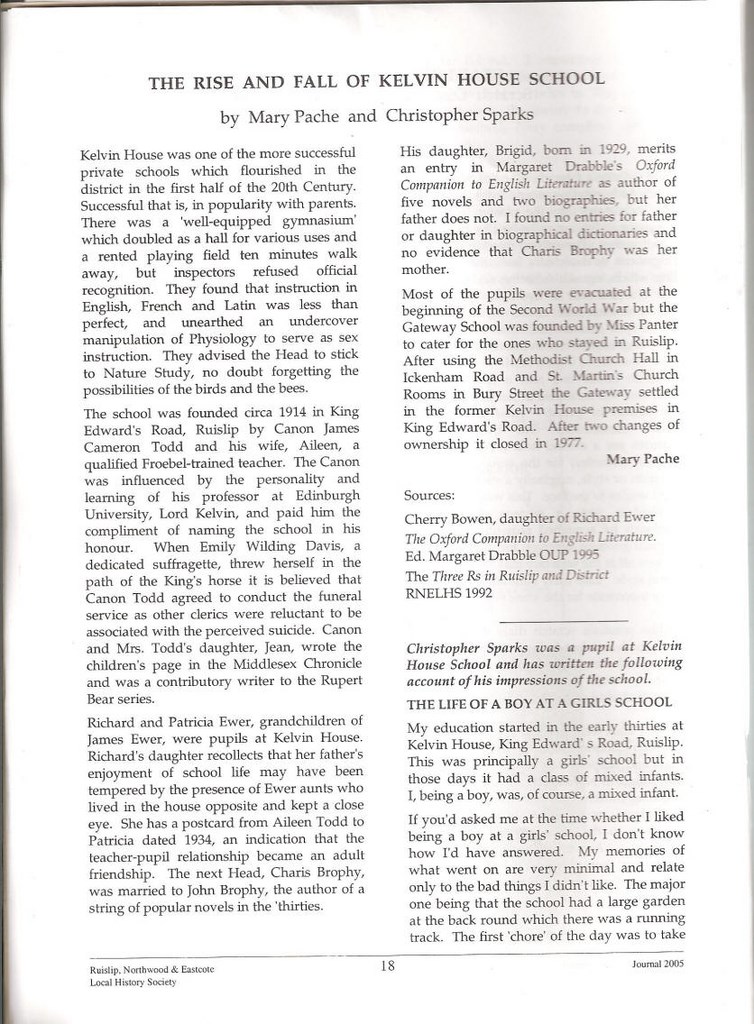 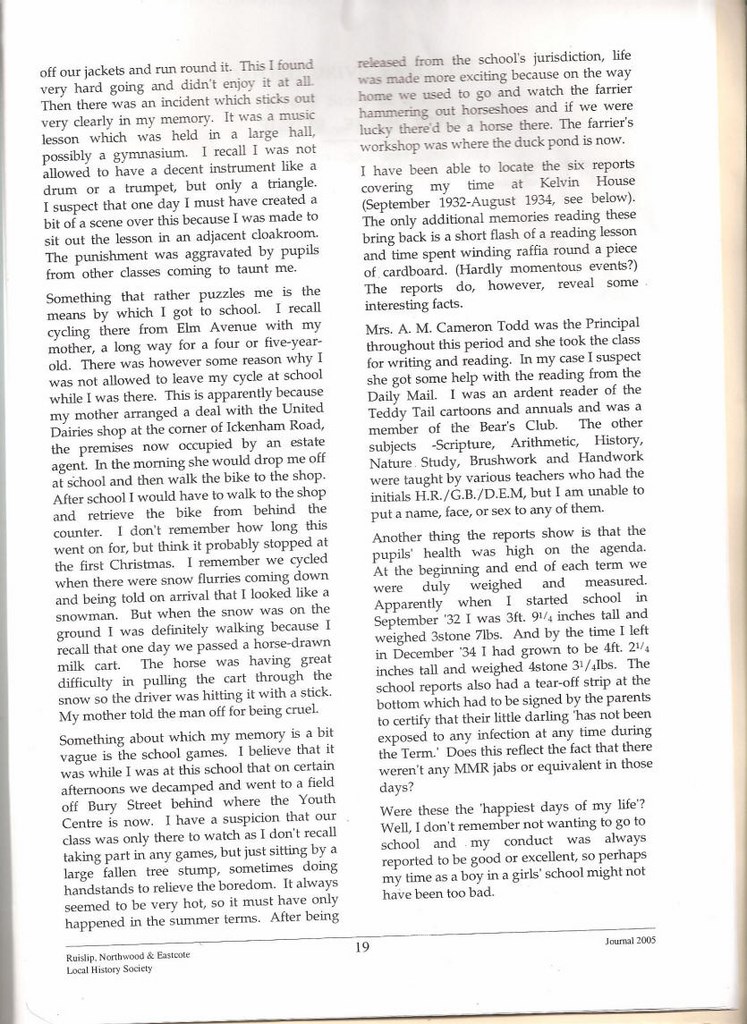