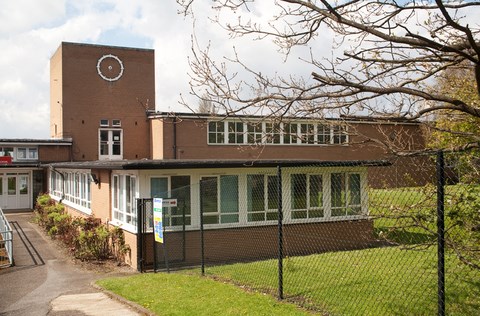 Field End Primary was the "wonder school" of the North West Middlesex Education Committee, the show case for modern school buildings and progressive teaching methods. It was built on a spacious site, and designed by Mr. Lobb. All the classrooms had one wall composed almost entirely of windows and opened onto an outdoor area. There were noiseless corridors, heat controlled rooms and illuminated blackboards.  Outside, there was a playground, grass plots and a playing field.

The school opened on 9th September 1947, "without any confusion or difficulty" (log book), with 460 pupils.   There was accommodation for 500, but that number was soon surpassed and the only criticism made in an HMI^s Report written in June 1949, was that the school was heavily overpopulated, so that the children filled ten classrooms and overflowed into the stage dressing rooms, the medical room, the staff room and a store room.

Miss Elliott who had advanced ideas on primary education encouraged non-formal work, based on centres of interest and environmental studies, which provided valuable and stimulating experiences, while allowing children a large measure of freedom. She provided a sand-pit and paddling pool outside, had a collection of sculptures based on nursery rhyme characters placed in the garden, encouraged the children to keep livestock and introduced gardening into the curriculum.

The school had a constant stream of visitors coming to study its way of life. Durham7s director of education came and visitors from the Rhondda Valley as well as many teachers and students from overseas; from Czechoslovakia, America, Denmark and Sweden. Students from training colleges in the London area like Maria Grey did teaching practice there.

Towards the end of the first school year, 3rd-7th May 1948, Miss Elliott arranged a Festival Week, when the school was open to parents and visitors, who could attend assemblies, see the children at work and join in the special activities, which included a pianoforte recital by Franz Reizenstein who often performed on the BBC's Third Programme. Miss Elliott hoped that by introducing the children to beautiful music, they would grow up appreciating it and all other beautiful things.

Miss Elliott received the MBE for her services to education in 1951 and left the school in September the same year to take up an appointment as Advisor to Sussex Education Committee.

The school continued to flourish in its beautiful buildings and surroundings, which were once intended to be a public recreation ground and the problems of overcrowding eased as the separate infants school and other schools in the neighbourhood were built, the post-war /bulge/ has long since passed.

FIELD END INFANTS' SCHOOL opened on the same site in 1951, with Miss Dix as head teacher.

There used to be a forum on here but it was never used much.....but below are some of the posts that were on it.

Moved from Ruislip to South Ruislip round 1956-7, short stay at Fieldend then on to Bourne School Southbourne Gardens. Can`t remember any names from Fieldend except Owen Morgan who I am still in touch with. Spent many happy hours dirt track biking on the rough ground opposite the school, which was known as Fieldend dump. The rough ground that is not the school. Now live in Cornwall but still think of Ruislip a lot. Alan Nunneley

I remember the red uniform. Was anyone else in Misss Price's class in the last year of primary school 1959-1960? It was the year she had some time off to play at Wimbledon and she read to us a chapter a day from 'The Secret Garden.' Laura and I were good friends with Carol Sutters and Brenda (whose surname I forget). Does anyone else remember the scandal when Barry wore longs instead of shorts? Anyone else who walked Mr. Wise's spaniel as a reward for being good? I wonder if each classroom still has its own little garden to sit out in the sunshine. I was radio monitor for a time and had to go and throw a switch backstage so that each classroom could pick up the broadcast on its own loudspeaker. What about the Savings Club, I didn't buy the stamps with Prince Charles's head on they cost 2/6d. I used the back gate, I'm sure I walked home by myself from about age 6, those were the times when parents let us do things like that.

Hello Lesley - we were in the same class. I think you lived in the Fairway.

I absolutely adored Miss Price (and her lovely dresses which I believe Christine Eales (?) mother made) and my memory is that Mr Wise and Mr Crook did too! Miss Price and Mr Crook could only have been in their 20's at the time? I remember the spaniel (and missing finger) but never got to take it out although I was always very good - at least at that age. He was a welcome contrast to Miss Dix, head of the Infant School who was an absolute dragon - I remember my mother had a big row with her although I can't remember about what.

I don't remember about Miss Price playing at Wimbledon but do remember The Secret Garden which is why I loved it when they serialised it on TV. I also remember the Old Testament stories which Mrs Davis (Peter's) mother used to read us. And do you remember the annual county handwriting competitions which I was once entered for but never won.

I still work in Hillingdon and, whenever I pass the school, I have a yearning to go in and check out the type of things you talk about. Thanks for the memories.

Hi, I believe I was in the same class as both of you, although your memories seem more vivid than mine. I too remember the posh red blazers. Also the caps! My memories from those days include the "rubber" Lego bricks; the wet clay pit we used when making pots; the troop down the corridor to assembly every day; the Times-Tables charts we had and the sense of achievement when the 9-times entry was ticked; the school fetes on the field; "all-in for Cowboys and Indians" in the playground; happy days! I think I used to walk home to Hunters Hill alone from about the age of 8. We wouldn't allow it now would we? I went on to St Nicolas in Northwood Hills for a few months then moved to Cornwall.

I remember my first day at school (infants). Sat by the fish tank whilst my mother talked to Miss Dix the headmistress. I think I remember a Mr. Elison and Mr Courtney and Mrs Cox. But that's about it. Remember running down to the rear exit in order to kiss my first ever love, a girl called Sally Chamberlain. Then on to the Junoir School. I can remember being in the rounder's team and meeting the second love of my life, a girl called Hilary Malasewska (sorry about the spelling. I think her mum was the school secretary. Spent a number of playtimes sitting on the wall listening to my new transistor radio. Can remember roller skating to school from Whitby Rd. Also those long summer days on the sports field.

Another lasting memory was getting the cane for the first time although I can't remember what for! I think I was rude to a teacher. Those were the days!!!!!!!!!!!!

Hi! Does anyone remember Julia Negus, Diane Creswell, Janet Davies or Colleen McLean? Mr Wise was the headteacher. He used to cheat at the teachers versus pupils netball match because he was so tall! Do you remember the three playgrounds - Girls, Boys and Mixed Infants? Remember when they used to cut the field in the summertime and we piled the hay up into forts and threw handfuls at each other (boys versus girls)as the field was also divided into Girls and Boys areas! Do you remember the Nursery Rhyme statues that used to be in the grounds, nestling amongst the flowers in the fomal beds? I believe they were by someone famous and subsequently moved elsewhere in the seventies or eighties due to vandalism (unheard of in our day!)

I left Field End School to attend St Mary's in Northwood and then in 1962 moved to Buckinghamshire.