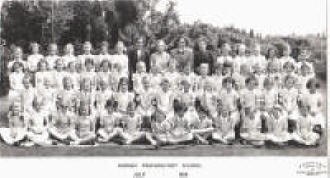 The date when this school was opened is not known, but it is listed in Kelly's 1937 local directory with Mrs. W. Bushell and Miss N. Whelan shown as proprietresses.

In the 1948 Ruislip Chamber of Commerce guide. Miss Whelan alone is shown as principal. She was a Catholic, and many of her pupils were Catholics, but the school took in non-Catholics as well.

Damien's seems to have originated as a preparatory school for girls, with a kindergarten for girls and boys. Later it developed as a girls only school, although occasionally, boys chiefly the brothers of girls who were at, or had previously attended the school, were admitted too. Even in 1962, one or two boys/ names still appeared on the school registers.

The school closed down in July 1965. Miss Whelan continued to live at the premises for a time, but eventually sold up and retired to Harrow.
Comments from "Angela".
The teachers in the back row from right to left are Mrs Wheeler, Miss Whelan, the Headmistress, Mrs Edwards (I think this is her name) who taught kindergarten  and the last teacher I cannot remember her name but she taught ballet and elocution (both I think).  I have been trying to remember exactly.

I am the girl sitting in front of Mrs Wheeler in the 2nd row with what looks like a bow in my hair.
The photo it taken in the back garden of the school.  There was a huge bush that you can see in the background which I think was a rose bush and as children it was great to play in.

Miss Whelan lived at the school.Both myself and my two sisters went to Damien school in the fifties.  Anne is in the picture on the site, Maryalice and I attended the school a few years after her.  It was a wonderful school.
Beth Mason

This was a small school run in an ordinary 3 bedroom house by Miss Whelan. She was Irish and of the kind but firm sort.  I was there from probably 1952 - 1957.   There were 3 classes with an age range from 5-11.  So ages ranges were mixed within the classes.  Mrs Edwards taught the little ones. I remember lovely stories, plastecene the colour of mud to play with, and a sung grace before we went home for lunch: "Thank you for the flowers so sweet, thank you for the food we eat, thank you for the birds that sing, thank you God for everything."

That class was in what would have been the lounge.  Upstairs in two of the bedrooms were the two older classes.  In the top class we had lots of desks of varying heights, a big map of the colonies in red on the wall and a blackboard.  Spelling tests at the end of the week were marked in blue and gold points on a chart.  We had 'French cards' on Friday afternoons - 'voulex-vous me donner le....'.  The poor woman also taught us knitting - we did tea cosies in two colours.  Chaos.  But basically we were prepared for the 11+ exam, very effectively.

Nearly everybody went home at 12 o'clock for lunch, walking for the most part by ourselves.  One or two unfortunates had to stay for a packed lunch but we all felt sorry for them.  Then back at 2.00 until 3.30.

We put our coats etc. in the garage and then walked in through the kitchen, where our 1/3 pints of milk were gently warming on the boiler.

Playtime was spent on a tiny concrete terrace in front of the house, unless the grass had been tested by the back of Miss Whelan's hand and pronounced dry.  Then we had the rest of the garden, all grass with a huge rose bush at the bottom, between us and the railway.  Only daring girls went behind this, and they got shouted at.

At break we played skipping in big groups with a long rope; also some lucky girls had their own small skipping ropes; 2 balls was popular, bounced against the wall; big group games of 'releasio' and other versions of tag ran for weeks.  If you didn't want to play you had to shout 'feinitz'.  I have no idea why or what it means or where it comes from, but it worked!

There were about 60 of us, and we had a safe and careful education there.  I loved it, and then went on to a convent in Hammersmith on a prestigious 'out of county' scholarship, so it clearly worked! I hope this is what you wanted.  I found that very detailed memories came back to me as I thought about this little school.  Great fun!

Debbie Bone
(nee Ollett)
It was a girls school but became co-ed for a time during WW2. Principal's name was Nora Whelan, there were just two more teachers called Mrs Edwards and Mrs Wheeler .

Very little is known about this school, which was at 44 Pembroke Road (demolished for flats to be built) but it certainly existed as the above invoice shows, and still existed in 1952.. So do you know anything? If so please advise Ruislip Online

If you are a former pupil you are asked to contact us. We have traced three!

I went to Damien School in 1962 I think when I was 4 going on 5. I can remember being downstairs for the classroom and later going to a classroom upstairs. I remember being an angel in the Christmas concert/nativity. I won a prize and still have the book I was given. When I was 5 I had a spell in hospital to have my tonsils out and I can remember going back to school and everyone asking me to say something because they thought I’d sound different!

I had a friend called Jackie Nicholson (I think I’ve remembered the surname correctly) and I sometimes went home with her at lunchtime.

I have fond memories of the school, I loved it. 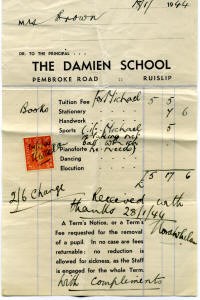 I attended the Damien School in 1951-1953. I remember my days there with great fondness. I learned French which has stayed with me all my life. I played a triangle in the little band we had. The instruments were lovely, especially the blue drums.

Valerie Courtenay JohnsonI lived in Pembroke Road and I think I started at the school in about 1950 (I was born in 1943). My name then was ANN SIMS. I became Head Girl in my last year and, having passed the 11 Plus, went on to Bishopshalt Grammar School in Hillingdon. Girls from my year included Gillian Saville, Juliette Simpkins, Susan Paulin, Mary Holbrook and Susan Taylor. Mrs Wheeler’s son Billy was my age and was also in my year at Bishopshalt Grammar School. I remember him being my partner at the first School Christmas Party.

One of my duties as Head Girl was to walk down to the Catholic Church at the end of Pembroke Road, to collect the key to the tennis court for our sports lessons.
By the way, in the school photo of July 1954, I am 5th from the right in the back row. You should just be able to make out my badge! 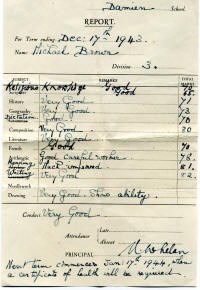 Believe it or not I am still working. I work for Thames Valley Police for 2 days per week and I love it.  I live in Thame, Oxfordshire, but have also lived in Guildford, Surrey and Aylesbury, Buckinghamshire.

My personal email address is ann-powell@outlook.com it would be nice to hear from anyone who remembers me.

I went to The Damien School from (I think) 1960 to 1965.  My cousin, Mary Elizabeth Lucas went there too. It was a wonderful school and Miss Whelan was an amazing woman.  I left because she retired due to ill health.  I have many lovely memories of my time there and a few photographs too.

Her son Bill Wheeler taught our own children at Hayden School – and Diane taught a special need class with Bill at Hayden later. We are still in contact after all these years

Her best friends were Heather Marshall on her left , Hilary Perkins on her right . the Girl two to her left was Rachel Clarke. She also remembers Debbie Ollett, Rosemary Matthews and Erica Leach

Diane loved Damien and has fond memories , including walking home alone for lunch, “what a wonderfully free childhood we had”. Diane’s mother went on to teach at a nursery school in St Lawrence’s Church in Eastcote with both Mrs Edwards and Mrs Wheeler

Diane’s memories of Miss Whelan were not as fond as those of others seem to be !

I was a pupil from 1963 till it closed in 1965, taught in downstairs back room looking at garden. Remember Miss Whelan well.