South Ruislip Council School was opened on September 7th 1931 in Station Approach near South Ruislip Station. The staff consisted of Miss M. D. Christian, headteacher, who looked after the juniors, while Mrs. Pearce supervised the infants. There were 54 pupils, 40 coming from Northolt Council School, five from Ruislip co E School, four from other schools and five new infants.

A school uniform was adopted: dark beret and badge for girls and a green cap and badge for boys. The badge was red based on the Middlesex County Council Arms in the form of a torch.

School activities included a concert and a jumble sale to raise money for school funds; and a country dance party was held
during the summer of 1932.

By August 1932, the school roll included 44 juniors and 27 infants. Attendance records were over 90% ; except in exceptional circumstances such as a whooping cough epidemic in April 1932. Regular health checks were instituted, including dental inspections and hearing checks. An increasing number of pupils sat the secondary education examination, and in 1935 three
pupils passed to go to Drayton Manor Grammar School.

A report by H.M.I. Mr. V. Ball based on a visit to the school on 18th March 1936 indicated that: "the school, which is housed in temporary buildings, has grownrapidly in the last few months. The recognised accommodation being 100, but with 41 taught in the hall, gives a total roll of 141. Since October 1934, there have been 160 admissions with 20 scholars last year being transferred to senior schools. The school provides a sound and enlightened form of instruction; the teacher of the infants has done very well, but problems exist with the older children: Art is not a very strong subject."

The families moving into the new houses going up all around South Ruislip put pressure on the school. By September 1937 the roll had risen to 160, with a waiting list of 50. An extension with four extra classrooms was opened on November 22nd and the school continued to expand, until the roll was 507. There were now 10 junior classes and 6 infant classes; extra teachers recruited included Mr. Cunliffe, Mr. Jones, Mr. Evans Miss Williams, Miss Jenkins, and Miss Oaten.

The school was requisitioned by the RAF during the War.

The school had some successes in the 1950s. Mainly due to the efforts of Mr. Addy, the school won all the possible trophies at
the district schools sports held on Saturday July 2nd 1955. Emphasis on the 11+ examination was evident, with some 40 plus
pupils sitting the examinations.

Large class sizes contributed to overcrowding in the old buildings and culminated in the building of a new Bourne Primary
School in Cedar Avenue, the buildings of which were occupied on Monday 5th March 1962, with a school roll of 338, comprising 219 juniors and 119 infants, with 9 permanent staff. 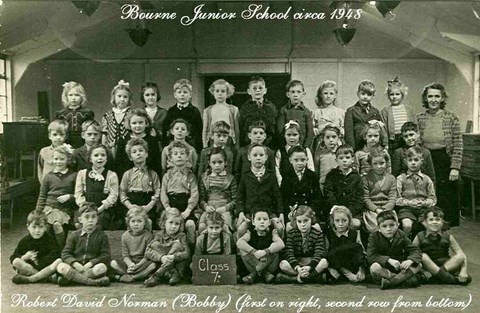 On the North side of Station Approach between Deane Ave and Bourne Ave.

Wooden structure sort of “C” shaped with detached brick building used as storeroom. Long driveway from Station Approach. Pulled down in late 50’s Not sure but I think it was once a part of “Northolt Aerodrome” as it was called then.

School Crest was the Middlesex three sabres I think.

Headmistress: Miss F.M. Buckingham. She was allegedly fired for fixing the 11+ exams, and we had to take them all over again. That was the second time I failed it!!  She also had to break up a fist fight between Mrs. Andrews and the mother of one of the pupils, in the classroom. Not sure what that was all about, but it was exciting if I remember!

Comforted by Mrs Riley during my first days of school. Fell in love with Ms Tivvy when I was 7 3/4. Hated Mrs Andrews... all the time. Abided Ms Buckingham ...... what can I say! If you don't remember me, you will if I reminded you that I was the worst goalie the school's soccer team ever had, and ever has had since, and ever will have I suspect! 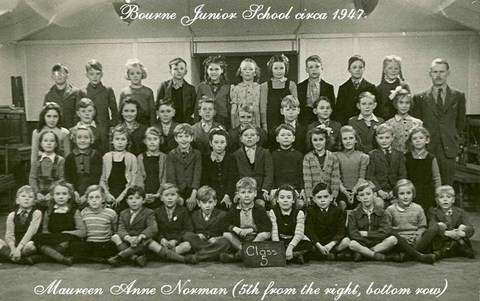 Bottom row far right is Terry Nelhams. He changed his name to Adam Faith and went on to fame and fortune!
The class of Mrs. Andrews ..ug! Names I think I can remember (and apologize if they're wrong) are: Alec and Donald Frazer (twins with the curly hair) John Tinsdale, Donald Pearson, Me...first on right, second row up! I'm not sure but I think the forth from the right, bottom row, is June Bolton. (sorry if I'm wrong) anyway, she is not sure either. How do I know this? I married her in 1961 and she is here with me right now!! Not sure if Pat Biggs is in this picture. Other names I remember: Pat Nutting (we were strong rivals in sprint) David Snell, Johnny Leach, Sheila Hughes, Janet Davis, Gillian Green, Alan Scott (my best pal.....also at Queensmead.)

Hello Robert, for your info the boy on the extreme right, bottom row in the 1948 class photo is my older brother Alan Glenister.
I also attended Bourne from 1953 to 1959.Mrs Andrews was my first teacher but I don't remember much about her, except that she told us she had a pet parrot think) called Archie. Other teachers I recall are Ms Pollock, Miss Peach, Mr Little, Mr House, Miss Mitchell and Miss Blaker.
Baz Glenister. 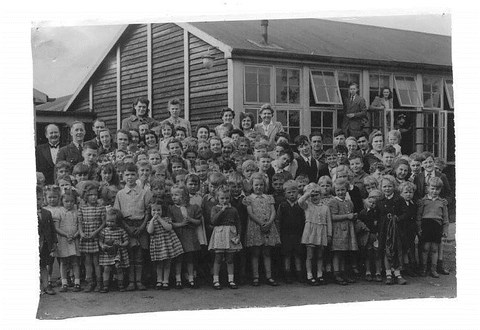 Just thought I would throw this one in. My sisters class, one year up: Maureen Norman, fifth from the right, bottom row. (Hope she doesn't mind!) I think her close friend Janet Wilde is second from the left, bottom row.

Can you help? 2nd row from back, 4th from right Is the girl's name Brenda?
Her face is spit of my cousin when she was younger and wondered if that was my aunt as young child. Traci O'Leary

Mrs. Riley: - Infants (4 to 6 year olds). Very motherly, gentle and re-assuring to us little kids who were scared out of our wits during the first days of school.

Mr. Williams: - English…….. good story teller. Introduction to Whinny the Pooh and Billy Bunter…. Boy, are the kids of today missing out. First day of school, went home at lunchtime, thought it had finished, mother took me back!
Later, I was the Soccer: Team Goalie……Was I good? No, the worst goalie in the history of English Schools, you ask the rest of the kids!

Some Posts from former Pupils.

If you wish to add to this page please use the contact form and be sure to include the page you are adding comments too.
My older brothers and sisters went to the Bourne Primary school when it was the old cowshed style building off Station Approach/Bourne Court.

The old British European Airways building-Bealine House was originally built as the next Bourne Primary but when the second world war broke out it was decided it was not suitable as a school as it was right in the flight path. My mum worked in this building and it felt like a school to me (very similar in style to Ruislip Gardens Primary school)

Eventually they built Bourne Primary in its current location in Cedar Avenue. It was a great school. I often sat in class staring out the window at the cows and the clouds.

To any one who cares or whom may remember me. My name is Michael Stokes, I moved to Manor Gardens with my family from Edmonton NE London in 1959 and I attended both the old and the new Bourne Primary Schools, at the old school, I can remember the Head Master, a Mr Evans who was very strict, I can remember the teacher I had in my last 2 years, he was a kind lean elderly gentleman with glasses, but I believe may have had a drinking problem, I cannot remember his name, but some days I could smell the booze on him and sometimes he had trouble talking, the headmaster had to fill in for him on an occasion I can remember, I didn't like the headmaster much at all, he didn't take kindly to anyone who had troubles learning and I think he may have though some of us needed a good whipping, it made me frightened to go to school.

I had some friends and it would be great to hear from any of them. The ones I can remember are Quentin Lockwood, who lived in Edwards Ave, Alfred Taylor, also from Edwards Ave. David Clark who lived on the other side of the field from Cedar Ave, I cannot remember the name of the street though and Keith Marsh also lived over that side of the field but in a different street closer to Edwards Ave. I also remember Christopher Apps & Julie Boyle, as class mates and poor old Billy a mate in our class who got run over and killed by an Express Dairy Truck near South Ruislip Railway Station on the High Street, That I will never forget or His poor old mum. I remember the new school and I was impressed when we moved there from the old one, the new furniture and outlook was great as well as the school meals. If anyone can jog my memory a bit about others and the teachers names I would be happy to hear from you. I have lived a happy life in Australia since 1966 when I left Queensmead secondary Modern School, and emigrated to be with my Mums brother after my Dad died in 1963.

Interesting photographs. Army child myself and far too many different schools. Lived at Torcross Road with grandparents 1940. Attended the Bourne Junior School. Head Mistress was a Mrs Thompson. There was a Miss Brooks as my teacher, a young brisk blonde lady.  Very well known was Stephen Knight and Mavis Veitch. Other names I recall were a Michael Jackson, Alan Miller, Minnie and Lilah Smith, Derek Davis.

A Polish manned RAF bomber crashed next to the school on a Sunday, at about 3pm. No civilians harmed. A little cafe was called the Myosotis, a few hundred yards before the school, as one came from the direction of Victoria Road.
Peter Giles

I seem to remember the name David Snell. We moved from Acton to South Ruislip around that time there were three of us my elder brother Alan & my twin brother John. Alan & I were at Bourne Primary first and then John came home (he was in a Church Army home) and Alan died at about the same time that was in 1950. John & I went on to Queensmead & then I went to Ealing Tech. David Mills


The school moved to Cedar Avenue in November 1962

The school today has a web site here